Find traditional instrumental music
This is the stable version, checked on 22 January 2022.
Jump to: navigation, search

Back to Dunnottar Castle

DUNNOTTAR CASTLE. Scottish, Slow Strathspey or Pastoral (whole time). D Major. Standard tuning (fiddle). AAB. The castle of Dunnottar is an ancient and impressive ruin which perches commandingly on the cliffs not far south of Stonehaven. The site has been fortified since the 12th century and rises some 160 feet above the sea. A single entrance is through a one doorway, protected by a portcullis and several rows of gun-ports, then up steps and finally through a tunnel to the main courtyard. Historical references to it abound: it was captured by William Wallace in his war against the English in 1296. Edward III gained the castle in the 1330's, only to be cast out my Moray. Later in the century it became the property of the Keiths, who exchanged a property in Fife for it. By the 16th century it was one of the most formidible fortresses in Scotland. In the 17th century it was besieged by Montrose in 1645 and by Cromwell in 1651, and was held for William and Mary in 1689. During the Jacobite era the Earl Marischal lost the castle in 1715 with the defeat of the Stewarts, and as a result the Duke of Argyll partially destroyed it the next year. 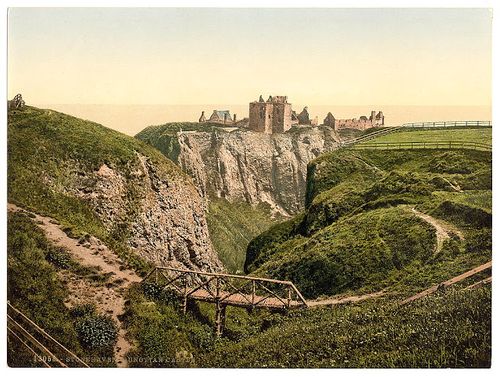 The tune was composed by either James Young (1815-1851) of Montrose, to whom it is often attributed {beginning with David Baptie in his Musical Scotland--Past and Present (1894)}, or by John Gunn (1813-1884) of Peterhead. J. Scott Skinner attributed the melody to Young in a hand written note on his manuscript copy of another Young tune, "Brig o' Dee (1) (The)." Young led the band of the Theatre Royal, Aberdeen, for many years.

Back to Dunnottar Castle