Find traditional instrumental music
This is the stable version, checked on 4 June 2020.
Jump to: navigation, search

Back to East Tennessee Blues

EAST TENNESSEE BLUES. AKA and see "Hey Mr. Muskrat," "Honeysuckle," "Honeysuckle Rag," "Huckleberry Blues," "Poca River Blues," "Ten Cent Cotton." American, Country Rag. USA, Va. C Major. Standard tuning (fiddle). One part (Christeson): AB (Beisswenger & McCann]: AA'BB' (Brody, Krassen, Phillips, Silberberg). The tune is credited (by biographer Bob Cox) to Tennessee fiddler Charlie Bowman (1889-1962), who is said to have composed it in the 1920's. Bowman, according to Cox, had not named the tune prior to recording it, and the name "East Tennessee Blues" was suggested by fiddler and bandleader Al Hopkins (of Al Hopkins and His Buckle Busters, AKA The Hill Billies, featuring Bowman on fiddle). Having the word "Blues" in the title was not entirely satisfactory to Bowman, as it was not a blues progression, however, there were several other so-called 'blues' tunes recorded that were country rags as well, and the name had some commercial cache. 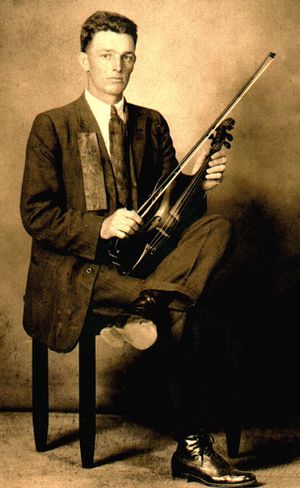 Another early recording was by Elmer Bird, with A.J. Ball on fiddle, and West Virginia fiddler Reese Jarvis recoded it for Brunswick Records in Chicago in 1929 as "Poca River Blues." Texas fiddler and bandleader Bob Wills recorded the tune in 1936. Bluegrass fiddlers sometime go to second position on the violin to play g/e and c/a double stops in the second part of the tune. "Honeysuckle," or "Honeysuckle Rag" is a related melody.


Back to East Tennessee Blues