English Bring to Gratney Green the Lasses that Hae Siller (The)

ENGLISH BRING TO GRATNEY GREEN THE LASSES THAT HAE SILLER, THE. Scottish, Air and Reel (cut time). G Major. Standard tuning (fiddle). AABBCCDD. The tune, apparently once a song air (now lost), appears in Robert Riddell's Collection of Scotch Galwegian & Border Tunes (1794) in which the author notes: "A Border Song, commemorating the Gretna Green weddings--which are the greatest violation of the marriage ceremony now permitted in any civilised country". Riddell refers to weddings by a magistrate, and not with benefit of clergy; these were legal only in some places, and scandalous nearly everywhere. The Scottish phrase "Ower/O'er Bogie" has a similar meaning. Siller is Scots dialect for 'silver' or money.

The title is partially explained when one considers that the village of Gretna Green, a stone's throw in Scotland from the English border, has historically been, and remains today, "one of the world's most popular wedding destinations" (according to Wikipedia [1], "hosting over 5,000 weddings each year, and one of every six Scottish weddings." It's popularity derives from Lord Hardwick's Marriage Act of 1754, which decreed that if a parent of a minor (under age 21) objected to the impending marriage of their child, they could prevent the legal union of the young couple. Although the act was lawful in England and Wales, it was not applied in Scotland, whose laws dictated that marriage was potentially lawful for boys to marry at age 14 and girls at age 12 without parental consent. Hardwick's legislation was intended to prevent young women from being taken advantage of by men interested only in the money that they brought to the union, whereupon the husband would defraud them. It is perhaps this unscrupulous practice that the title of Riddell's tune refers to. 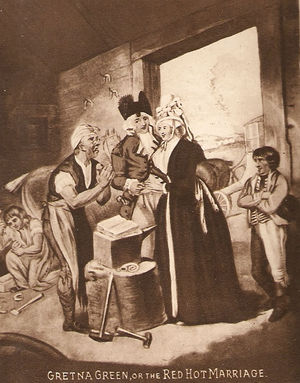 Gretna Green's prospects as a destination for eloping lovers greatly increased with the construction in the 1770's of a toll road through the English village of Graitney, to the nearby Scottish Gretna Green. By tradition, couples would be married "over the anvil" by a "blacksmith priest", a practice that evolved from the Scottish tradition of a couple's vows required to be performed in front of two witnesses. The smithy was often a central location in a village, and therefore a likely destination for an eloping couple where they would in likelihood find at least two people to hear the exchange of pledges. There is a blacksmith's building in Gretna Green that dates to the early 18th century, but in fact, most marriages in the village were performed in inns or marriage houses, where the all-important consummation of the marriage could occur in a convenient room upstairs (important because prior to this act the marriage could be annulled). One Grentna Green lay "priest", Robert Elliot, claimed (in The Gretna Green Memoirs) to have married some 7,500 people between 1811 and 1839.

See also notes for "Polwart on the Green" and "O'er Bogie" for discussion of similar customs.


See also listing at:
Hear the tune played on Scottish smallpipes by Matt Seattle and Bill Telfer on youtube.com [2]