Find traditional instrumental music
This is the stable version, checked on 17 August 2020.
Jump to: navigation, search

Back to Esmeralda Polka (La)[edit] 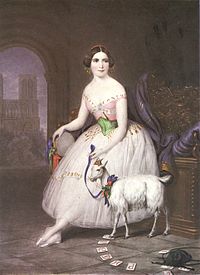 Fanny Cerrito in the title role of the Pugni/Perrot La Esmeralda, London, circa 1844.

The Esmeralda, sometimes called the Three-Slide Polka, was a ballroom dance popular in America in the second half of the 19th century. It consisted in a combination of steps from the polka and the galop. The music was usually a polka in 2/4 time; occasionally a 6/8 time tune was used.

Back to Esmeralda Polka (La)[edit]