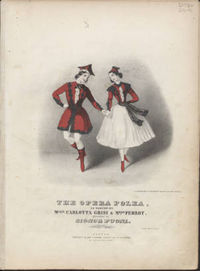 . "Opera Polka" appeared in a ballet La Esmeralda in 3 acts, 5 scenes, inspired by Victor Hugo's Notre Dame de Paris. It was originally choreographed by Jules Perrot, with music by Cesare Pugni, and was danced in 1844 at the Ballet of Her Majesty's Theatre by Mlle. Carlotta Grisi (1819-1899) and Monsieur Perrot. (See also note for "Esmeralda Polka (La)").

The melody was entered into several mid-19th century English musicians' manuscript copybooks, including those of Lawrence Leadley (Yorkshire), the Hardy Family (Dorset), and Michael Turner (Sussex). "Original Polka (The)" and "Opera Polka" are on the page next to each other in Hamilton's Universal Tune Book and both are contained in the Hardy family manuscripts, suggesting the Hardys used that volume as their source.