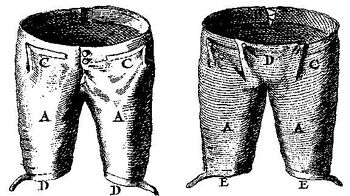 Coarse frieze was manufactured in England for export to Ireland in the nineteenth century. "Frieze cloth, a mixed and for the most part an unraised fabric, has been manufactured for a series of years, and continues so to be, probably, in increasing quantity", wrote Samuel Jubb in 1860. "This cloth is heavy and sound, rather than fine in quality. It is made... almost entirely for the Irish trade" Frieze was to be seen Jubb noted impassively, worn so threadbare it was reduced to "the merest expression of threads crossing each other at right angles... on the back of an Irish pig-jobber or that of an Irish reaper.