Find traditional instrumental music
This is the stable version, checked on 9 November 2021.
Jump to: navigation, search

Back to Georgia Belle

GEORGIA BELLE(S). American, Reel (cut time). USA, Western North Carolina. G Mixolydian [Krassen]: G Major. ADae or standard tuning (fiddle). ABA'CCA'C'. The tune was in the repertory of a group of early 20th century North Carolina fiddlers, who influenced one another. Bill Hensley recorded the "Georgia Belle" in in 1946. Hensley was born in Happy Valley, near Johnson City, Tennessee, in 1868, and later moved to Madison County, North Carolina, and then to Buncombe County, North Carolina. The reel was also played by fiddler Manco Sneed (1885-1975), born in Jackson County, North Carolina, who later moved to Graham County where he encountered J. Dedrick Harris. Sneed was recorded playing the tune by Peter Hoover in a 1959 field recording. Harris was a legendary Tennessee fiddler who played with Bob Taylor while the latter was running for governor of the sate in the late 1800's. 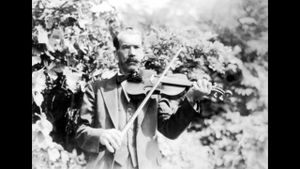 Osey Helton
He moved to western North Carolina in the 1920's and influenced a generation of fiddlers there: Osey Helton, Manco Sneed, Bill Hensley (who also knew Bob Taylor), and Marcus Martin. Manco Sneed learned the tune from J.D. Harris or Mac Hensley (Bill Hensley’s uncle) around 1897-1903, according to Miles Krassen. "George Belle" was also the repertoire of fiddler Osey Helton, from the same region as Sneed.

According to western North Carolina fiddler Bill Hensley (1873-1960), the fiddle tune "Georgia Belle" originated with a man named Hugh Bell, who was alive and fiddling during the American Civil War, but "who went crazy in jail playing his fiddle"[1]. Hensley told one interviewer that Hugh and his brother "came over from England" and that they were both fiddle makers. Hensley also attributed the tune "Green River" to Bell. Fiddler Osey Helton, who lived near Asheville, played "Georgia Belle" but called it "Pokey Huntus" (Pocahontas, the odd spelling is Helton's). "Hensley and Helton are great rivals and I suspect Bill of changing the name of the tune just because he didn't want to call it by the same name that Helton did"[2].


Back to Georgia Belle