GILDEROY [1]. AKA - "Gilde Roy," "Guideroy." Scottish (originally), English, Irish, American; Hornpipe, Reel and Air. A Minor. Standard tuning (fiddle). AB (Thomson): AABB (most versions): AABBCCDD (Oswald). An earlier, minor key, relative of what was later called "Red Haired Boy (The)" family of tunes (for which see "Gilderoy (2)," a closely related group of tunes that are predominantly in the mixolydian mode). Caoimhin Mac Aoidh explains that the name 'Gilderoy' is an English corruption of the Gaelic words Giolla Ruaidh; giolla is generally taken to mean a servant or a young person, while ruaidh literally means 'red', though when used in conjunction with a person it refers to red hair. Interestingly, he mentions that in modern Scotland and Ireland hunting and fishing stalkers or guides are still referred to in anglicised form as 'Gilles'. The hero of the ballad "Gilderoy" was a historical personage, a Scottish freebooter of the notorious Clan MacGregor by the name of Pàdraig Ruadh MacGregor (An Gille Ruadh), or Gilderoy (Outlaw), seven of whose gang were taken by the Stewarts of Athol and hanged in Edinburgh in July, 1638. Robin Williamson maintains the ballad was well known as far away as England by the middle of the 17th century, a decade or two later. However, the earliest extant version of the ballad in print is in the collection Westminster Drollery (1671). The mention of MacGregor's name in John Lacy's play Sauny the Scot (1675) suggests that the outlaw's name was commonly recognized at that time, and the tune itself (the "excellent Scotish tune, call'd Gilderoy") is mentioned in a broadside of 1664. Domhnall Uillean Stiùbhart[1] suggests that "an earlier version of the ballad--or at least the melody accompanied by a rudimentary narrative--was brought back to London by veterans he had served in Scotland with General Monck [Ed. in the English Civil War]; this is certainly the case with some Gaelic airs which enjoyed a contemporary vogue." The first text of "Gilderoy" was superseded in the late seventeenth century by a more elaborate, "improved" version that plays down the protagonist's Highland origins, and is thought by Dr. Stiùbhart to be a Scottish Lowlands production. 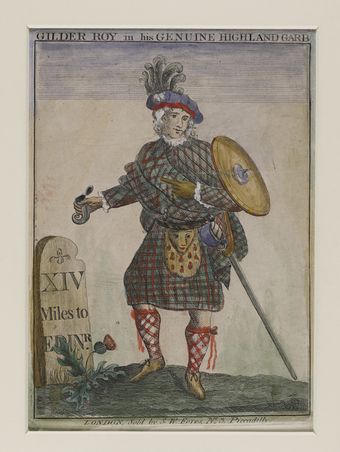 Gilderoy was a bonny Boy, had roses tull his shun,
His Stockings made of the finest silk, his Garters hanging down
It was a comely sight to see, he was so trim a Boy,
He was my Joy and Heart's Delight, my handsom Gilderoy.

Oh, sike a charming Eyen he had, a great as sweet as Rose;
He never wore a Highland plad, but costly silken Cloaths.

A printing of the tune appears in the [James] Gillespie Manuscript of Perth (1768). The title appears in Henry Robson's list of popular Northumbrian song and dance tunes, which he published c. 1800.The march was also entered into the c. 1776-1778 music copybook of fifer Thomas Nixon Jr. [1] (1762-1842), of Framingham, Connecticut. Nixon was a thirteen-year-old who accompanied his father to the battles of Lexington and Concord, and who served in the Continental army in engagements in and around New York until 1780, after which he returned home to build a house in Framingham. The copybook appears to have started by another musician, Joseph Long, and to have come into Nixon’s possession.

Bruce Olson includes "Gilderoy [1]" in a large song air and dance tune family that includes "Green Shores of America," "Maria Martin," "Lazarus," "Come all you worthy Christians," "Star of the County Down," "Unquite Grave," "King Herod and the Cock," "Tree in the Wood (The)," "Babe of Bethlehem (The)," "Bonaparte Crossing the Alps," and "Bonaparte's Retreat."