Hell Amongst the Yearlings (1)

Find traditional instrumental music
This is the stable version, checked on 4 November 2021.
Jump to: navigation, search

Back to Hell Amongst the Yearlings (1)

HELL AMONG(ST) THE YEARLINGS [1]. AKA - "Trouble among the Yearlings," "Hell After the Yearlings," "Devil Among the Yearlings," "Round Up the Yearlings," "Hell Among the Indians." American, Reel (2/4 or cut time). USA; Oklahoma, Mississippi, Alabama, Georgia, West Virginia, Pennsylvania, Arkansas, Missouri, Nebraska. G Major (Thede): D Major (most versions): C Major (Christeson/1984, Songer). Standard tuning (fiddle). AB (Christeson, 1984): AA'B (Bayard): AABB (Thede): AA'BB (Phillips): AA'BB' (Beiswenger et al/Fiddler Magazine): AABBCCDD (Songer). Several unrelated tunes in various parts of the United States carry the name "Hell Among(st) the Yearlings," so obviously a memorable title in rural communities. The title has itself aroused some speculation. It is thought by some to represent 'trouble with the cattle'-yearlings being young cattle that are bred for the first time and quite rambunctious. Another interpretation hinges on 'hell' as a term for dense underbrush and thicketed country, with the title meaning that the yearlings are in the underbrush, thus making it quite a chore to round them up. Chicago musician Paul Tyler made the following comments (Fiddle-L, 5/10/04).

In 1939, Edgar Lee Masters (of Spoon River fame) published in Esquire an account of a visit he made with Theodore Dreiser to the home fiddler John Armstrong in Oakford, Illinois. The account reappeared in Masters' book The Sangamon in the Rivers of America series. Masters grew in Menard County where Armstrong lived. The visit was made in 1916, two decades before the account was published, so you have to allow for the author's creativity to have been at work on the memories. Here's Masters' words of what John Armstrong had to say about Hell:

The first strain is generally played in nine measures instead of the usual eight, although there are exceptions (c.f. Sarah Singleton's versions). The second strain varies and is seldom similar from region to region or collection to collection. The title (or variations on it) is often a "floater" and can be found attached to some totally unrelated tunes. The most influential version historically was recorded by Kanawha County, West Virginia, fiddler Clark Kessinger (1896-1975) who recorded it (backed with "Turkey in the Straw") in 1928 for the Brunswick label (#235), his second recording for the company. It was the first commercial recording of the tune and featured Kessinger's much imitated technique of brushing the stings of the fiddle with his forefinger, creating a pizzicato effect (Mountains of Music, John Lilly ed., 1999, p. 28). Alan Jabbour (Fiddle-L, 5/08/04) says that most modern versions seem to stem from the Kessinger recording, and that the extra beats in the fourth phrase of the high part of the tune have become standard in many bluegrass and old-time renditions. He interprets these extra beats as 'dwelling' notes, and describes them as "that tendency of Appalachian fiddlers, especially in West Virginia and Kentucky, to linger on a note mid-phrase for a couple of beats before resuming the course of the tune. The note is often the fifth of the tune's scale, and that's the case here." The exceptions to the Kessinger variant group are a few Appalachian fiddlers like Henry Reed and Doc White (who played an alternate low strain from Reed) who played the tune in square, or regular, strains of 8 bars. White's playing of the tune can be heard on AFS 12,704 (June, 1967). 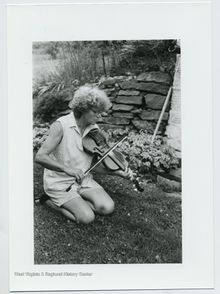 Folk Musician Sarah Singleton Playing the Fiddle, Heater, W. Va., July, 1973.
The title is mentioned in reports (1926-31) of the De Kalb County, Alabama, Annual (Fiddlers') Convention, finds Cauthen (1990). The piece was recorded for the Library of Congress by musicologist/folklorist Vance Randolph from Ozark Mountain fiddlers in the early 1940's, and, by Herbert Halpert, in 1939 from the playing of Lauderdale County, Mississippi, fiddler Frank Kittrell. Today it is especially common among Midwest fiddlers, and is on Missouri fiddler Charlie Walden's list of '100 essential Missouri fiddle tunes'. Jabbour finds references (in WPA interviews, for one) to at least the 1930's in Texas fiddling, and suspects it may have had older currency in the state. See also related "Streak of Fat Steak of Lean."

Back to Hell Amongst the Yearlings (1)