Find traditional instrumental music
This is the stable version, checked on 5 November 2020.
Jump to: navigation, search

Back to Hollow Poplar

HOLLOW POPLAR. AKA - "Hollow Poplar Log." AKA and see "Old Hollow Poplar." Old-Time, Bluegrass; Breakdown. USA, Nebraska, Missouri, Tenn. G Major. Standard tuning (fiddle). AABB. Popularized by Tennessee's Fiddlin' Arthur Smith. Earnest Smith, the grandson of the famous Tennessee fiddler, told Susan Songer (1997) that this tune was his father's favorite and that it was the first tune he played on the Grand Old Opry (WSM radio). Although Smith had played the tune since the 1930's, he never recorded it until he made his 'comeback' with the McGee Brothers in the late 1950's. It may have been picked up by Midwest fiddlers from Smith's radio broadcasts, or may have been independently in circulation in the region. Related tunes are "Forks of Sandy (1)" or "Three Forks Sandy (1)," especially the fine strain. Drew Beisswenger (2008) points to similarities of the 'B' part of "Hollow Poplar" and the 'A' part of the "Green Corn" family of tunes. In the repertoire of the Perry County Music Makers (Tenn.), Nannie Presson and Bulow Smith on zither and guitar. 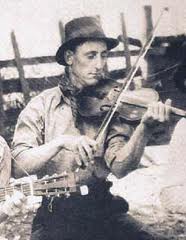 Back to Hollow Poplar