Back to I'll Gang Nae Mair to Yon Town 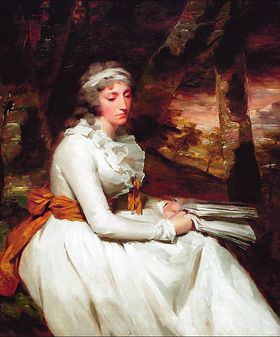 Mrs. Richard Alexander Oswald, 1794, by Sir Henry Raeburn
Miss Lucy (Louisa) Johnston of Hilton was a charming and accomplished beauty at the close of the 18th century; a musician and frequenter of concerts and the dance assembly until she married one Richard Oswald of Auchencruive in 1793. Robert Burns wrote extra verses for the song "I'll gang nae mair to yon toon" (which he called "I'll Ay Ca' in by Yon Town" or "O, Wat ye Wha's in Yon Town") in honor of her arrival at her husband's family seat, near where he lived:

She died of tuberculosis four years later, after the birth of two daughters, despite Oswald's efforts to contain the disease by taking her to Portugal where the climate was thought healthful.

“We’ll Gang nae Mare tae Yon Toon” was the regimental march of several British army units at one time, including the 2nd Battalion The Queen’s Royal Regiment, the 1st Battalion The Essex Regiment and the 2nd Battalion The Royal Hampshire Regiment. The Scottish tune was introduced into English regimental repertoire by the first commanding officer of the 2nd Queens when it was raised in 1858. The Colonel, a man named Bruce, had transferred in from a Highland regiment and took the melody with him (according to David Murry, Music of the Scottish Regiments, Edinburgh, 1994, p. 205). These regiments have since been consolidated and amalgamated several times into other units, and have long ceased to exist. Murray writes, in expanation of the title:

Soldiers were not popular in Victorian England—except, sentimentally, when engaged in fighting far away—and the title of the march might well have found an echo in the hearts of the soldiers as they marched out of an unpopular station where, perhaps, the people were unfriendly, the girls unapproachable, and the publicans hostile.

A pipe reel entitled "Cha tèid mi fein a Chèilidh" (I won't go a gossiping) from William Gunn's Caledonian Repository of Music Adapted for the Bagpipe (Glasgow, 1848, p. 17) is a version of "I'll gagn nae mair to yon town." Another version of the tune was entered into the large 1840 music manuscript collection of multi-instrumentalist John Rook (Waverton, Cumbria). County Cork cleric and uilleann piper Canon James Goodman (musicologist) had a reel version of the first two parts of "I'll gang nae mair..." in his mid-19th century music manuscript (vol. iii, p. 167) under the title “Earl of Dalkeith's Reel (2),” but he also had versions under the 'gang nae mair' title (vol. 2, p. 159[1] and vol. 3, p. 153). The tune was entered twice in the music manuscript collection in the possession of Rev. Luke Donnellan[1] (1878-1950) in the keys of 'G' and 'A'. Donnellan's version is quite similar to that in the James O'Neill manuscripts. See also the Irish variant "Lucky in Love," recorded in New York by County Leitrim flute play John McKenna in the 78RPM era.

Back to I'll Gang Nae Mair to Yon Town