JAMIE ALLEN. AKA and see "Jimmy Allen," "Reel of Tullochgorum (1)." English, Scottish, American; Rant, Country Dance Tune (4/4 time). England, Northumberland. USA, New England. G Major. Standard tuning (fiddle). AABB. Northumbrian musician Jamie Allen (c. 1734-1810) was a famous smallpipes player whose name is associated with this tune. Allen has been credited with devising improvements to the smallpipes, increasing their limited range of an octave with the addition of keys. Allen's father Will (1704-1779) was perhaps a pipemaker and was River Warden of the Coquet. His wife, Jimmy's mother, was a gypsy, and the elder Allen associated much with her folk. Son Jimmy (or Jamie) was the subject of two biographies, largely fanciful, and it is hard to determine the facts of his life. It is said he was at various times piper to the Duchess of Northumberland, that he enlisted in the army, and was a fugitive from justice. At any rate, he was highly regarded by his contemporaries as a musician who was thought to have played the Northumbrian smallpipes, Border pipes, and Union (uilleann) pipes. Chronicler John Sykes noted on the occasion of the piper's death: 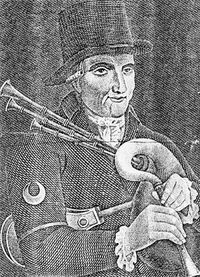 13th November, 1810. Died in the house of Correction (under Elvet Bridge) at Durham, where he had been confined upwards of seven years, under sentence of transportation for life, James Allan, a character wellknown in most parts of the United Kingdom, particularly in Northumberland, where he was known by the name of Jemmy, the duke’s piper, and was in early life a great proficient on the pipes. He was capitally convicted of horse-stealing at the assizes held in Durham in 1803, and received sentence of death but was afterwards pardoned on condition of transportation for life; but on account of his age and infirmities, his sentence could not be carried into execution. He had nearly completed his 77th year and for the greatest part of his confinement was afflicted with a complication of disorders. Had the chequered life of this notorious character been prolonged a little, he would have regained his liberty as the first signature of the Prince Regent officially addressed to the city of Durham was a free pardon for Allan – but death had removed him beyond the reach of royal clemency.

The melody is categorized as a 'rant' among Northumbrian musicians, although it could be employed as a polka. The Scottish name for the tune is "Reel of Tullochgorum (1)." Johnson also prints the contra dance of the same name to this tune.