Find traditional instrumental music
This is the stable version, checked on 26 July 2021.
Jump to: navigation, search

Back to John Anderson My Jo

JOHN ANDERSON MY JO. AKA - "John Anderson's Maggot." Scottish, Air and Country Dance Tune (4/4 time). A Minor (Wright): G Minor (Oswald). Standard tuning (fiddle). One part (Howe, O'Farrell): AABB' (Alburger): ABC (Aird, Wright). Kidson (1915) asserts the tune comes from "remote antiquity," meaning in this case the 16th or 17th century. Mary W. Stuart dates the words and tune to about 1560, and relates that the hero of the ditty was traditionally supposed to "have been the town-piper of Kelso and a very gay dog." Alburger (1983) finds "John Anderson" in the Agnes Hume MS (1704), which includes "the earliest Scottish descriptions of a country dance with music, (in which the tune) in the original is written out completely four times," but Emmerson and others find earlier, prototype, versions in lute manuscripts such as the Rowallan (c. 1612-28) and Skene (1615-20). In the 18th century it was printed in Alexander Stuart's Musick for the Tea Table Miscellany published around the year 1726. "John Anderson" is called for twice as the vehicle for songs in Allan Ramsay's Tea-Table Miscellany (1724), however, many different sets of lyrics were set to it, including some famously bawdy songs (about impotence) as well as Robert Burns' famous lyrics (a polite parody), contributed to James Johnson's Scots Musical Museum (vol. iii, 1790). The melody retained its popularity and became a favorite song of the early 19th century, at least in Lowland Scots centers, records Emmerson (1971), who notes it (probably with the Burns lyrics attached) was among those selected by Queen Victoria for John Wilson's recital during her 1842 visit to Taymouth Castle (Wilson was the foremost professional singer of Scots songs of the time). 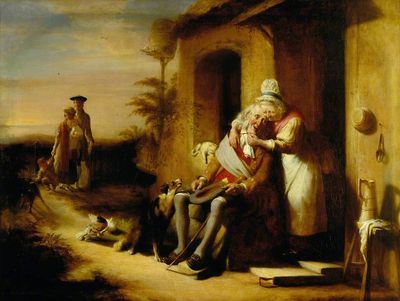 There are reportedly some forty variants of the tune, which can be found in England (e.g. "Pauls' Steeple," "I Am the Duke of Norfolk"), in Wales to Welsh words ("Yn Nyfrfryn Clwyd" {The Vale of Clyde}), in Ireland and Scotland with Gaelic and English lyrics ("Cruiskeen Lawn"), in Sweden (see Macfarlane), and in America as "When Johnny Comes Marching Home Again." Cazden (et al, 1982) points out that writers differ greatly on which tunes should be considered related to each other and which should be considered as separate and distinct melodies. William Chappell claimed "John Anderson my jo" as English in provenance in his Popular Music of the Olden Time (1853, Appendix, p. 770), believing it to be a modification of "Paul's Steeple/I Am the Duke of Norfolk" (see abc X:2, below). John Glen (Early Scottish Melodies, 1900) disputes this and critiques Chappell's claim which he says is based on the appearance of "Paul's Steeple" in John Playford's Dancing Master (1651). Chappell, says Glenn, cannot back-date a tune simply because the title refers to an actual incident a century previous (the steeple of St. Pauls, London, was destroyed by lightning in 1561). Further, Chappell seriously miss-dated the Scottish Skene manuscript, contends Glen, and was "perfunctory and misleading" in his treatment of the Skene and other Scottish manuscripts (see abc X:3, below, for the Skene tune). Glen also is suspicious of Chappell's allusion to "Cruiskeen Lawn" but wisely leaves it the Irish to defend themselves against English usurpation of that melody.

Numerous sets of words have been set to the tune, although very generally they depict attempts to entice or seduce, or a frustrated complaint with the protagonist:

From the Merry Muses of Caledonia (1800) and poet Robert Burns:

John Anderson, my jo John, I wonder what you mean,
Ye're goin' on the spree John, and stayin' oot at e'en.

Ye're going to Lucky Fill the Stoups, ye meet wi' Cooper Will,
Ye sit and booze like silly gowks, and aye the other gill.

Burns also used the tune for another song in Merry Muses, called "Wad ye do that?":

Young man, an ye should be so kind,
When oor gudeman's grae hame,
As come to my bed-chamber
Where I am laid my lane;
And lie in oor gudeman's stead,
I will tell you what,
He fucks me five times ilka nicht,
Wad ye do that?

When I was a wee thing, and just like an elf,
All the meat that e'er I gat, I laid upon the shelf.
The rottens and the mice, they fell into a strife,
They wadnae let my meat alane till I gat a wife.

According to Mary Anne Alburger the first Scottish description of a country-dance with its music occurs in the Agnes Hume Manuscript; the tune is John Anderson and it is written out in its entirety four times, and includes directions for the dance:

The first man and 2[nd] l[ad]y turn right hands round and into their place and the
second man and the first l[ad]y the same. Then d[ance] back all four and turn s[ideways].
Then all hands reound till the 2[nd] couple come in the first place. The tune is to be played
over through once over every time so the first couple has time to take their drinks.
To be danced with as many pairs [as] you please.

Back to John Anderson My Jo