Find traditional instrumental music
This is the stable version, checked on 12 September 2022.
Jump to: navigation, search

Back to Keel Row (The)

Stokoe and Bruce (1882) devote a note to the tune claiming Northumbrian authorship for "The Keel Row," an extremely popular tune in its time (in Scotland, Northumberland and Durham) and "the best known and most popular of all Northumbrian lyrics." He refutes assertions that the tune is Scotch (a provenance often credited), citing the following:

1) the 'keel' is a vessel which is only known on the rivers Tyne and Wear {Kidson points out however that 'keel' is an old Saxon word and has been used in Scotland as well as Newcastle};

2) In the collection of the Society of Antiquaries of Newcastle is a MS Book of Tunes, dated 1774, in which the tune appeared exactly as it did in Stoke's time;

3) Joseph Ritson, once a celebrated antiquary, included it in his collection of old songs, 'The Northumberland Garland,' published 1793 (a garland is a of eight to sixteen tunes).

Stokoe and Bruce point out that these dates are anterior to the appearance of the song in any Scottish collection, having found that Cromek inserted it in his Remains of Nithsdale and Galloway Song, 1810, where it is labelled a "popular bridal tune in Scotland" and set to a Jacobite song called "As I came down the Cannongate." (Stokoe also says that Allan Cunningham, in his Songs of Scotland, 1825, asserts that Cromek's version is imperfect, "and gives another, which is simply a protracted paraphrase of the original song, with the word 'keel' entirely omitted {except in the title}, the word 'shallop' being substituted"—Kidson sees this same song as a copy of the older Jacobite lyric.) Although taking no sides in the debate, Kidson (1890) does find the melody under the "Keel Row" title in an early Scottish edition which predates the Northumbrian printings, in Neil Stewart's c. 1770 A Collection of favourite Scots' Tunes, with Variations for the Violoncello or Harpsichord, by the late Charles McLean, and other eminent masters (Edinburgh). 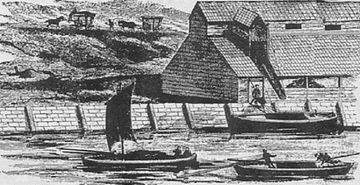 The tune was contained in the Northumbrian music manuscript collection of John Smith, dated 1752, unfortunately now lost. The contents were copied by 19th century folk-music collector John Stokoe in 1887, when the manuscript was in the possession of Lewis Proudlock of Longhorsely by Morpeth[1]. Stokoe's volume Northumbrian Minstrelsy had been printed five year prior, and his interest in Smith’s ms. demonstrates Stokoe's continuing commitment to older Northumbrian music. Researcher and Northumbrian piper Matt Seattle notes that this is the earliest known version of "Keel Row." Northumbrian musician John Bell (1783-1864) entered the tune and words into his c. 1812 music manuscript collection. In his annotations to the tune on the FARNE site [1] researcher Matt Seattle explains that the Sandgate area was a riverside of Newcastle and took its name from an old city gate on the route between Newcastle and Shields. It was a densely populated area, primarily by those laboring classes whose livelihood was with the river traffic. The 'row' in Keel Row refers to the giant oar used by keelmen when faced with poor wind or an adverse tide, says Matt.

Emmerson (1971) believes the tune to have been composed on and for the Northumbrian smallpipes, and Shield's famous variations on "Keel Row," composed for the instrument, are printed by Hall & Stafford.

Chris Bartram (Devon, England) maintains that while the words to “The Keel Row” are from the North‑East of England the tune is actually widespread throughout the whole island of Great Britain, and he suggests the ‘modern’ prevalence of the 'Keel Row' words is largely due to mid-20th century commercial recordings and early media broadcasts. Outside of Northumberland alternate ditties were sung, such as (from southern England, courtesy of Mr. Bartram):

The melody is contained in the music copybook [2] of John Buttery (1784-1854), a fifer with British army's 37th (North Hampshire) Regiment of Foot (so designated in the army reorganization of 1782), who served from 1797-1814. Later in life Buttery emigrated to Canada, where he died. Buttery's manuscript collection has also been identified as belonging to John Fife [2], with a suggested date of 1780. Fife was a family name, like Buttery, identified with the manuscript. Buttery included a number of popular and traditional melodies to be played over drum rolls signalling retreat, assembly, troop, and other military functions, and it may be that "Keel Row" was also employed as a march. In the Norfolk area of southern England, the “Keel Row” was paired with two other schottisches, Washing Day and Old Mrs. Huddledee; concertina player Scan Tester (1887-1972) and fiddler Walter Bulwer (1888-c. 1972) both independently knew the medley. In addition to morris and English country dancing the tune is often associated with the broomstick dance in southern England, a dance which is still occasionally performed in pubs at Yuletide. The Scots usually play the tune as a schottische, while in Ireland it is found as a barn dance or a fling, and sometimes as a reel (see "Rising Sun," Mullin's Fancy <div class="mw-ext-score" data-midi="/w/images/lilypond/m/d/mdydcvtvkoxfwhdfdh6x8995iwmgrmj/mdydcvtv.midi"><img src="/w/images/lilypond/m/d/mdydcvtvkoxfwhdfdh6x8995iwmgrmj/mdydcvtv.png" width="614" height="67" alt=" X:1 M:4/4 L:1/8 K:D af ~f2eB ~B2|~d3e fa {b}a2|f2 df edBe|dBAF (3EFE D2| "/></div> "Strawberry Blossom (1) (The)". The melody appears as "Bagpipe (2) (The)"/"A Bhalgun, a Bhalgun" in Glasgow Highland piper, pipe teacher and pipe-maker William Gunn's (1795-1867) Caledonian Repository of Music Adapted for the Bagpipes (1848).

Anne Lederman, in her article on “Fiddling” in the Encyclopedia of Music in Canada (1992), remarks that the “Keel Row” was the vehicle for the Broom Dance, popular in the 18th and 19th century Canadian fur-trade. There are several derivations of "Keel Row" in the music of Quebec. See, for example, "Galope du Lac St-Jean," "Reel à quatre (3), "Reel Blanchette," "Reel du quêteux Tremblay de Aimé Gagnon," "Rêve du quêteux Tremblay de Aimé Gagnon (2).

“The Keel Row” has been arranged by classical composers Claude Debussy and Eric Satie. See also the third strain of "Gigue Anglaise (La)."