Back to Kemp's Jig 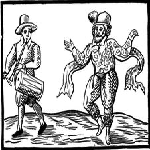 KEMP'S JIG. AKA and see "Roland." English, Country Dance Tune. D Major (Johnson, Raven): D Minor (Playford). Standard tuning (fiddle). One part (Raven): AB (Johnson): AAB (Playford). Published by Playford in his English Dancing Master (1651). The tune dates to the 16th century and commemorates the feat of Will Kemp, a member and shareholder with William Shakespeare in the Company of the Lord Chamberlain's Men and the Globe Theatre, who bet he could dance a morris jig from London to Norwich (about 125 miles). Kemp was a famous comic actor and clown, and it is likely that Shakespeare wrote some of his early characters with Kemp in mind. He played the part of Dogberry in Much Ado About Nothing, and is famous for creating the Auguste character (thought to have been descended from the Vice character of medieval mystery plays), although Shakespeare and he may have had a falling out due to his penchant for improvising and playing to the crowd.

Kemp's dancing feat took approximately nine days, spread out over about a month in order that he might rest and recuperate during the journey. He was accompanied by a pipe-and-tabor musician and a referee who kept strict watch that he danced the distance; important as betting was heavy and Kemp put up a considerable sum on himself to complete the distance. His feat, really a publicity stunt of sorts, proved lucrative for in addition to his winnings he received a pension from Norwich and published a book on his exploit entitled Kemps Nine Daies Wonder: Performed in a Daunce from London to Norwich: Containing the Pleasure, Paines and Kinde Entertainment of William Kept between London and that Citty in his Late Morrice: Wherein is Somewhat Set Downe Worth Note; to Reproove the Slaunders Spred of Him: Many Things Merry, Nothing Hurtfull. It was first published in London in 1600. Kemp died in 1603.

Back to Kemp's Jig