Back to Kennedy's Bridal Jig[edit]

KENNEDY'S BRIDAL JIG. AKA and see "Bridal Jig (1) (The)," "Leinster Lasses (The)," "Priest's Leap (1) (The)." Irish, Jig. G Major. Standard tuning (fiddle). AAB. Researcher Conor Ward finds an identical tune in the c. 1885 music manuscript collection of fiddler Francis Reynolds, under the title "Leinster Lasses (The)," with a slight variation in the second strain repeat. Ward notes: "James Kennedy (1861-1927) and Francis Reynolds (1862-1946) were of the same age and grew up in Ballinamore, Co. Leitrim and Ballinamuck, Co. Longford, respectively, towns that were only 30km apart from one another." See also "Gray Hen (The)" for another geo-musical connection between Kennedy and Reynolds that Ward has unearthed. 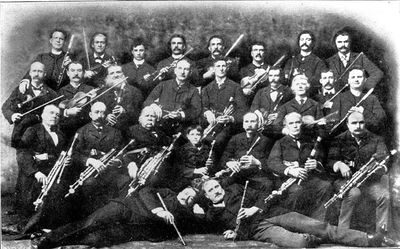 James Kennedy is standing in the back row, extreme right.

Source for notated version: contributed by Chicago Police Officer James Kennedy [O'Neill]. In a 1906 letter to Alfred Percival Graves in 1906 (printed in "A Few Gossipy Notes" in the Journal of the Irish Folk Song Society, London), O'Neill wrote: "James and Ellen Kennedy, Ballinamore, Leitrim, fine violinists: father a noted player, said to be the best in the country–James is remarkable for his smooth, round tones, and the entire absence of scratching of bow." '

Back to Kennedy's Bridal Jig[edit]