Find traditional instrumental music
This is the stable version, checked on 12 July 2021.
Jump to: navigation, search 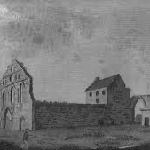 KILWINNING('S) STEEPLE. AKA and see "Clock in the Steeple (The)," "Jumping Geordie," "Pope's Toe (The)," "Prince of Wales' Fancy (The)," "Templeglantine (1)." Scottish, Reel. A Major. Standard tuning (fiddle). AB. The reel "Kilwinning Steeple" is credited (in Manson's Hamilton's Universal Tune Book, 1853, p. 168) to Hugh Gilmour, a blind fiddler from Stevenston, Ayrshire, who died in 1822. Manson indicates the tune was published by him for the first time. The melody is similar to the Scottish song "There's nae luck aboot the hoose (there's nae luck ava)."

The steeple at Kilwinning, Ayrshire, was part of a monastery dedicated to St. Winning, established in 1140. It was largely destroyed in 1560 during the Reformation by Alexander, Earl of Glencairn, acting on warrant from States of Scotland, the only parts of the structure remaining being the steeple and a gable. These were later repaired by the Earl of Eglinton, and it was from this steeple, on a pole 120 feet high, that the archers annually shot for the Popingoe. The old steeple collapsed on the 2nd of August, 1814, but was rebuilt on the same site, the foundation being laid by William Davidson Esq., "Most Wonderful Grand Master of the Most Ancient Mother Lodge of Kilwinning" (i.e. Freemanons). It was completed with a clock with four faces [1].

The curious word Popingoe is explained by Robert Forsyth, in his The Beauties of Scotland (1805).

In some measure connected with this abbey is a company or society of archers, which is said to have existed here as far back as 1488; at least this date is asserted in a minute in their records dated September 1688, which is signed by a number of gentlemen. Archery is practiced here annually, usually in the month of June. We have said that the institution is connected with the monastery. This is rendered probable from the sorts of archery which have been used from time immemorial. It is of two species. The one is an elevated mark, called a popingoe. The popingoe is a bird known in heraldry. It is on this occasion cut out in wood, fixed on the end of a pole, and placed 120 feet high on the steeple of the monastery. The archer who shoots down this mark is honored with the title of 'Captain of the Popingoe'. He is master of the ceremonies of the succeeding year, sends cards of invitation to the ladies, gives them a ball and supper, and transmits his honours to posterity by a medal, with suitable devices, appended to a silver arrow. [p. 405]

See also "Kilwinning Archers' Strathspey" which title also honors the event. The alternate title "Pope's Toe (The)" is a corruption of Popingoe.