King of the Cannibal Islands

Back to King of the Cannibal Islands[edit]

KING OF THE CANNIBAL ISLANDS. AKA and see "Nottingham Swing," "Hilly-Go Filly-Go All the Way," "Cumberland Reel," "Vulcan's Cave." English, Jig. England, Dorset. D Major. Standard tuning (fiddle). AAB A popular jig under a bewildering variety of titles, including "Cabbages and Onions," "Cannibal Islands (The)," "Hilly-Go Filly-Go All the Way," "Hokee Pokee Wonkee Fum," "King of the Cannibal Islands" "Deux Rivales (Les)," "Nottingham Swing," "Vulcan's Cave" and the "Cumberland Reel." The melody has been the vehicle for numerous songs and dances. In Scotland it is the vehicle for a Scottish Country Dance called "Cumberland Reel," in England it was a country dance called "Vulcan's Cave," and the "Nottingham Swing," while in Ulster it has been a popular tune for ceili bands who often play it as a single jig or slide, and finally, the melody has also seen service for parts of quadrilles. According to Anthony Bennett's article "Rivals Unravelled: A Broadside Song and Dance", Folk Music Journal, vol. 6, no. 4, 1993) originally it was a composition of John Charles White, published as the third set of a quadrille in Les Deux Rivales/The Two Rivals. White himself adapted it as a country dance and called it "Vulcan's Cave," "introduced at the Theatre Royal Covent Garden, performed at the Amicable Society's Balls, Willis's Rooms, and all Fashionable assemblies in London, Bath, Cheltenham, Brighton, etc." "King of the Cannibal Islands" (the Cannibal Islands referred to Fiji) is the name of a popular comic song set to the melody by A. W. Humphreys about 1830 and "Sung by him with great applause at the London Concerts." A broadside printing of the lyrics from Glasgow in 1858 directs it to be sung to the air of "Hokee pokee wonkee fum." It begins:


The "Cannibal" title appears in a repertoire list brought by Philip Goodman, the last professional and traditional piper in Farney, Louth, to the Feis Ceoil in Belfast in 1898. While mostly traditional in his repertoire, Goodman regularly played several novelty or 'popular' tunes. In 1866 during the Canadian gold-rush Robert Burrell grumbled in a letter that the music from Bakerville's Hurdie house across the street was disturbing his sleep. He mentioned four of the songs that were ringing in his ears, among them "King of the Cannibal Islands." As "Vulcan's Cave," the melody not only appears in John Burk's manuscript collection but also those of the Rev. Robert Harrison of Brampton, Cumbria, dated 1820, and John Rook (Waverton, Cumbria), 1843.

There actually was a King of the Cannibal islands, Cakobau, head of state of the Viti Government of 1871-4, although first crowned in 1867 by some European settlers. His authority was always in question, and the European settlers hardly seemed to acknowledge his authority, but in 1871 he gained the support of European associates and formed a government. Unfortunately, it was not successful, and in 1874 he ceded Fiji to Great Britain. In his own words: "If matters remain as they are, Fiji will become like a piece of driftwood on the sea, and be picked up by the first passer-by. The whites who have come to Fiji are a bad lot. They are mere stalkers on the beach. … Of one thing I am assured, that if we do not cede Fiji, the white stalkers on the beach, the cormorants, will open their maws and swallow us.". 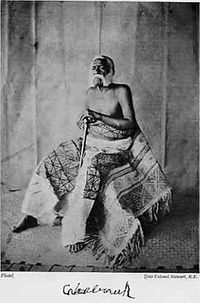 Back to King of the Cannibal Islands[edit]