Back to Kitty O'Neil's Champion[edit]

KITTY O'NEIL'S CHAMPION. AKA and see "Kitty O'Shea." American, Sand Dance (2/4 time). A Major. Standard tuning (fiddle). AABBCDDEEFFGG. Although played as a hornpipe in Ireland, the tune is classified as a 'jig' in Ryan's/Cole's, referring to a style of old-time banjo tune, a duple-time 'sand jig' and not the 6/8 Irish jig. The sand jig, according to New York researcher, musician and writer Don Meade (Fiddler Magazine, vol. 8, No. 1, Spring 2001) is a syncopated dance in schottische tempo performed as a series of hard-soled shuffles on a sand-strewn stage. The 'E' and 'F' parts of "Kitty O'Neill's Champion" belong to a tune called the "Mechanics' Hall Jig" (in Ryan), and the 'B' part is similar to 'B' part in "Phil Issac's Jig." The 5th ('E') part also resembles the first part of Ryan's "Bird on the Wing." The tune was revived in the late 20th century by Donegal fiddler Tommy Peoples, who misnamed it "Kitty O'Shea," and, as Peoples was an influential fiddler, the "O'Shea" title has become attached to the tune. 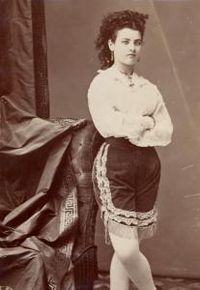 Meade finds that Kitty O'Neil (1855-1893) was born in Buffalo, New York to Irish immigrant parents and was a celebrated variety stage dancer from around 1868 to 1892. She performed primarily in variety theaters on Broadway and the Bowery in New York City, but often in Boston and on tours of smaller cities. She often appeared in shows produced by the renowned entertainers Tony Pastor and Ned Harrigan. In addition to her prowess at Irish reels and Lancashire clog dances, Kitty specialized in dancing the sand jig. For more, see Meade, "Kitty O'Neil and Her 'Champion Jig': A Forgotten Irish-American Variety Theater Star" [1].

Back to Kitty O'Neil's Champion[edit]