Back to Lady Charlotte Campbell's Reel (2)

LADY CHARLOTTE CAMPBELL('S REEL) [2]. AKA - "Lady Charlotee Campbell's New Reel." Scottish, Reel. B Flat Major (most versions): C Major (Surenne). Standard tuning (fiddle). AB (Surenne): AAB (most versions). Composed by Robert Mackintosh (c. 1745-1807). Mackintosh (or sometimes MacIntosh) was probably from Niel Gow's village of Inver, but settled in Edinburgh at least by 1773, becoming part of the Music Society group of professionals. He composed classical music, but his lasting legacy was his Scottish fiddle compositions (Alburger, 1983). The melody is a companion reel to his "Lady Charlotte Campbell's Strathspey (2)," both published on a single sheet issue by Mackintosh in 1800, and later included in his Fourth Collection (c. 1803 or 1804). The great Scots fiddler-composer, J. Scott Skinner, made his opinion known with a note appended to the tune in his Harp and Claymore collection (1904): "The finest Reel in B flat extant." It also appears in musician and dancing master Isaac Cooper of Banff's (b. 1755-d. 1810 or 1811, although sometimes the year is given as 1820) Collection of Strathspeys, Reels and Irish Jigs for the Piano-Forte & Violin to which are added Scots, Irish & Welch Airs Composed and Selected by I. Cooper at Banff (London, Edinburgh, c. 1806). John Glen (1895, "Biographical Sketches", xii) remarks "It cannot be supposed that Edinburgh bandleader, musician, composer and music publisher Nathaniel Gow lived on the best of terms with his brother musicians...The only instance in which any compositions by Robert Mackintosh appeared in the Gow publications are "Lady Hamilton Dalrymple" in the Fourth Collection (1800), p. 23; "Lady Wallace (1)" and "Lady Charlotte Campbell's (medley) Reel and Strathspey" in the Second Repository (1802), pp. 14 & 31; and "Lady Betty Boyle" in the Third Repository (1806), p. 32, and in all cases excepting the last Mackintosh's name is suppressed." 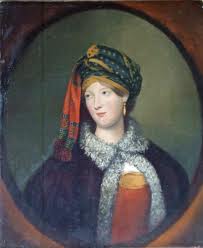 Lady Charlotte Maria Campbell (1775-1861) was the second daughter of John, the 5th Duke of Argyll, and was a Lady-in-Waiting to Caroline, Princess of Wales. She received the name of Charlotte from king George III's queen, who was her godmother, and that of Maria in memory of her aunt, Lady Coventry. A beautiful and gifted woman, she was a famous hostess and had a passion for letters, befriending Lord Byron and Sir Walter Scott, among others. She herself wrote a number of romantic novels but is best known for her anonymous Diary Illustrative of the Times of George IV, 1838. She was also the object of the affections of Matthew Gregory "Monk" Lewis, gothic author and playwright, who dedicated his Tales of Terror (1799) to her (see note for "Timour the Tartar" for more on Lewis). Lady Charlotte has also been described as a friend and encourager to both Lewis and Scott. However, she married, in 1796, Colonel John Campbell (d. 1809) of Shawfield. In addition to her literary leanings, Lady Charlotte was a woman of fashion, who in 1793 introduced the clinging high-waisted dress "imitating the drapery of pictures and with the breasts lightly covered or left bare." To enhance the "look," sometimes women would add pads on the stomach beneath the bust for the merest 'suggestion of pregnancy', or rather, a signalling of fecundity. Charlotte was musical--she played the harp--and evidently appreciated her native music, for a note in the Gows' Fourth Collection (1800) for the tune "Maid of Isla" reads: "I am indebted to Col. & Lady Charlotte Campbell for this beautiful tune." Charlotte inherited good looks from both sides of her family. Her father, the handsome John, 5th Duke of Argyll, was himself the son of the beautiful Mary Bellenden, while her mother Elizabeth was one of the celebrated Gunning sisters, among the most beautiful women of their time (see "Miss Gunning's Fancy). Croker remarked in his manuscript:

Lady Charlotte Campbell was thought by the best-judging of her contemporaries the most beautiful creature ever seen. I saw her in 1801, still magnificent, whole theatres turning round to look at her.

The next passage, from Cassell's Old and New Edinburgh, vol. 2 (p. 192) is also telling. The famous antiquarian and man of letters Charles Kirkpatrick Sharpe owned a residence in Edinburgh, and was visited around 1824 by Robert Chambers, who recorded:

His servant conducted by to the first floor, and showed me into what is called amongst us the back drawing-room, which I found carpeted with green cloth and full of old family portraits, some on the walls, buy many more on the floor. A small room leading out of this one was the place where Mr. Sharpe gave audiences. Its diminutive space was stuffed full of old curiosities, cases with family bijouterie, &c. One pretty object was strongly indicative of character, a calling card of Lady Charlotte Campbell, the once adored beauty, stuck into the frame of a picture. He must have kept it, at that time, about thirty years.

See also "Lord John Campbell (1)" for more on the family.

Back to Lady Charlotte Campbell's Reel (2)