Back to Lady Montgomery's Reel (1) 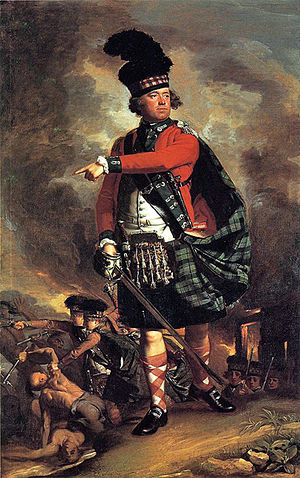 The reel was composed by Colonel Hugh Montgomerie (1749-1819), and is frequently the vehicle for the dance "The Montgomerie Rant" (having either replaced "Lord Eglintoune" or positioned first in the medley). Montgomerie was an interesting character--an amateur but talented Scots cellist, fiddler and composer[1] who loved his native music, he was "singularly tongue-tied" and had trouble expressing himself in words. Serving in the English army in the American campaigns, he became the 12th Earl of Eglintoun, and was elected Member of Parliament for Ayrshire. "He took over the Eglinton policies with a grand conception of his role as laird, instituted many improvements, maintained a splendid stable and fine equipages, and appointed a family piper" (Emmerson, 1971). Poet Robert Burns dubbed him 'Sodger Hugh'. The title of the reel is sometimes given as "Lady Mary Montgomery," who was the daughter of General Archibald Montgomery (c. 1756-1796), 11th Earl of Eglinton. In a confusion of military Montgomeries, Lady Mary (1787-1848) married a cousin, Major General Archibald Montgomerie (of Coylsfield), Lord Montgomerie, who was the son of tune composer Hugh Montgomerie, 12th Earl of Eglinton, Baron Ardrossan.

Gow (1817) directs "Slow, with expression." The English dance band Muddy York plays a 'G' chord for the first six measures of the 'A' part for variety. The alternate title "Cuddy's Fancy" comes from W.A. Cocks collection. One of the oddest appearances of the tune is on the barrel organ from the polar expedition of Admiral Parry of 1819. In place of a ship's fiddler (common in those days), Parry introduced a mechanical barrel organ on board ship to provide entertainment and a vehicle to which the men could exercise (i.e. by dancing). "Lady Montgomery's Reel" was one of eight tunes on barrel no. 4.

New York musician, writer and researcher Don Meade says the tune was recorded in the key of 'C' by Donegal fiddler Hughie Gillespie in New York in the 78 RPM era, and later by Andy McGann, Joe Burke and Felix Dolan under the title "Phelim's Frolic" on the "Tribute to Michael Coleman" recording. Paul Cranford (1997) remarks that Cape Breton fiddler Johnny Wilmot had an Irish variant in the key of D with a third tune in the related minor. See also the related "Rising Sun (3) (The)" and the P.W. Joyce's "Guiry's Reel." Fiddler Hugh Gillespie [2] (1906-1986), an immigrant to New York from County Donegal, recorded a version in 1938 under the title "Miss Montgomery's."

Back to Lady Montgomery's Reel (1)