Find traditional instrumental music
This is the stable version, checked on 23 October 2020.
Jump to: navigation, search

Back to Lea Castle

LEA CASTLE. Irish, Single Jig. G Major. Standard tuning (fiddle). AABB. Lea Castle, Portarlington, County Laois, dates from around 1260, built by the De Vesci family. It was taken numerous times, and passed through many hands. It was captured and burned by the Chiefs of Offaly, and again burnt in 1285 by the O’Connors, in 1307 by O’More and in 1315 by Bruce. The adjacent town did not survive these depredations, and was abandoned. Subsequently it was occupied by the O’Mores, FitzGeralds, the Earls of Ormonde and the O’Dempseys, before a final destruction by the troops of Oliver Cromwell in 1650. The O'Dempseys lingered, and the clan became famous as horse-stealers and rapparees; in the 18th century the celebrated horse-thief James Dempsey used the vaults of the keep as his stables. It is today a ruin, with only one of four bastions remaining to be seen. 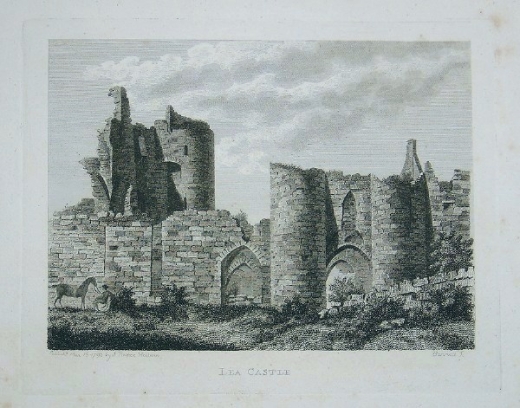 Lea Castle in a drawing by Francis Grose, 1792

Additional notes
Source for notated version : - Joe Keegan, father of fiddler and pianist Josephine Keegan, and himself a flute player, "from the County Laois side of Partartington" [McGuire & Keegan].

Back to Lea Castle