Find traditional instrumental music
This is the stable version, checked on 24 May 2020.
Jump to: navigation, search

LOG CHAIN [2]. American, Reel (cut time). D Major. Standard tuning (fiddle). AB (Silberberg): AABB (Phillips). The source for the tune is Lonnie Seymour (1922-2002) of Chillicothe, Ohio, born into a family of fiddlers that included his grandfather, father, and Uncle Lon. As a teenager Seymour played for dances in his local area, interrupted by service in the army during World War II. He returned to play with a band called The Ross County Farmers [1], who played for late 1940's broadcasts on radio station WBEX in his home town. 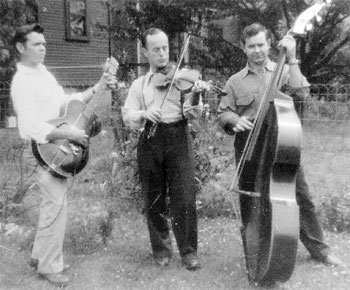 See also listing at :
Jane Keefer's Folk Music Index: An Index to Recorded Sources [2]
Hear Lonnie Seymour play the tune at the Fiddle Club of the World [3] and at Slippery Hill [4]