Back to Lord Alexander's Reel[edit]

LORD ALEXANDER'S REEL. Canadian, Reel. D Major. Standard tuning (fiddle). Composed by fiddler Abbie Andrews of St. Catharine's, Ontario. His band, the Canadian Ranch Boys, featured the McMullen Brothers on vocals and guitars (their father was a fiddler who emigrated from Belfast, northern Ireland in 1915), and, later on, a teenage accordionist named Walter Ostanek. They were primarily a dance band, but they featured vocals, comic patter and comedy skits, one of which involved a huge wrestler by the name of Sky Hi Lee, who feigned displeasure that his singer wife, Billie Allen, was not getting her share of the spotlight [1]. 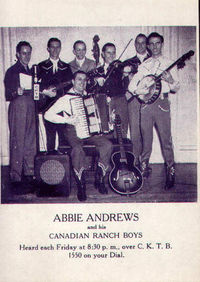 Back to Lord Alexander's Reel[edit]