Back to Lord John Scott 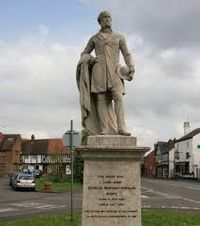 LORD JOHN SCOTT. Scottish, Reel. A Major. Standard tuning (fiddle). AB. Composed by William Marshall (1748-1833), who also wrote a tune for Scott's wife, "Lady John Scott," born Alicia Spottiswoode, a songwriter and folksong collector. Lord John Douglas Montague Scott (1809-1860) was the 4th Duke of Buccleuch's third son and brother of the 5th Duke of Buccleuch. He was a Scottish landlord and a Member of Parliament. Craig-Brown (in The History of Selkirkshire or Chronicles of Ettrick Forest, vol. II; "The Burgh and Parish of Selkirk" {1886}) wrote of him: 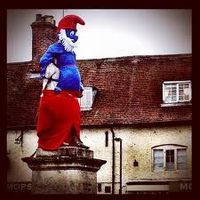 The statue as a smurff 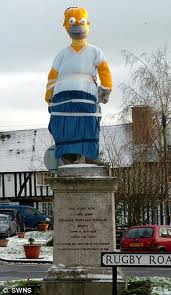 The statue as Homer Simpson

He was returned M.P. for Roxburghshire in 1832, after a severe contest, in which he distinguished himself as a ready and effective public speaker. Much hope was entertained of his future services to the Conservative party, but he became early disgusted with Parliament, preferring the pleasures of a rural life, and hunting with great energy across that border country where of yore his ancestors had spurred the horse on far other errands. He was said to be the best hand with a salmon-leister on the Tweed; indeed there was no form of sport or pastime calling forth dash and energy in which he did not excel.

During his later years John Douglas entertained deep and earnest religious convictions, and his last public appearance at Melrose in defence of genuine Protestant conservatism is said to have been a remarkable display of vigorous eloquence. It was on this occasion that Lord John enunciated his opinion, since become celebrated, that the "High Church party in Scotland had acted the part of sappers and miners for the Church of Rome." He died in 1860, greatly lamented by the Duke, their mutual attachment being of the warmest and most affectionate nature.

Alicia outlived him by forty years, dying at the turn of the 20th century.

There is a statue of Scott in a square in the village of Dunchurch, Warwickshire, that in recent decades has been the 'victim' of a recurring prank—it is dressed as a cartoon character at the year end holidays. Scott owned the majority of the village until he sold it back before his death in 1860, and his landlordism is perhaps thus avenged.

Back to Lord John Scott