Back to MacKenzie Hay

MACKENZIE HAY. AKA - "McKenzie Hay." Scottish, Strathspey or Highland Schottische. D Mixolydian. Standard tuning (fiddle). AB. Composed by J. Scott Skinner (1843-1927), who recorded it himself on a wax cylinder in London in 1906. It was published in the early 20th century on a single song sheet [1], paired with Skinner's reel "Spey in Spate (The)." MacKenzie Hay, to whom the tune was dedicated, was the President of the Highland Strathspey and Reel Society in London (or, as James Hunter records, The Caledonian Society of London). Cape Breton fiddler Bill Lamey recorded the tune (in medley with Skinner's "Kirrie Kebbuck") on 78 RPM. 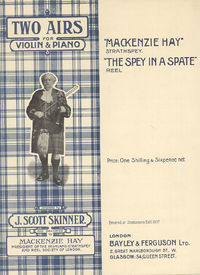 The sheet music cover for "MacKenzie Hay" and "Spey in Spate" (dedicated to Mrs. Hay).

Back to MacKenzie Hay