Find traditional instrumental music
This is the stable version, checked on 15 June 2020.
Jump to: navigation, search

The subject of the title, MacPherson, was born in Banffshire about 1675, the son, it is said, of a beautiful gypsy woman and a Highland laird, MacPherson of Invershire, Inverness-shire. He was raised by his father who unfortunately died young, at which time he went to live with his mother (whose good looks he had inherited, though perhaps he acquired his immense physical presence and strength from his father). As MacPherson grew to adulthood he was lured to the wilder life and became the leader of a lawless gypsy roving band, and he developed a reputation as a freebooter who operated in the counties of Aberdeen, Banff and Moray. Highwaymen were not rare in Scotland, and once he was captured and condemned it is likely he would have been forgotten, but MacPherson insured his lasting fame with a grand gesture on the cold November morning of his execution (11/7/1700) on the scaffold at Market Cross in Banff.

Although various legends differ in the details, the main thread has MacPherson, with his fiddle in his hand, stepping onto the platform whereupon he took up his bow and proceeded to play his last communication to the world, his rant (or sometimes three tunes: "MacPherson's Rant," "MacPherson's Pibroch" and "MacPherson's Farewell"). At the conclusion of his performance he offered his violin to the assembled spectators (or, as one version goes, "to anyone in the crowd who would think well of him"), but either no one was brave enough to take it from the hands of a condemned man, or he had no well-wishers in attendance, or no one wished to implicate themselves by receiving the instrument. He looked around scornfully, lifted the fiddle and broke it over his knee in a grand gesture of contempt, though (as if the shattering were not dramatic enough) some versions have him dashing the instrument over the head of his executioner and flinging himself headlong off the scaffold and into oblivion. At least one version has him throwing the pieces of the instrument into his awaiting grave, though the broken remains of the fiddle he supposedly played that day can be seen in the Macpherson Clan Museum at Newtonmore.

It seems the best legends are those that embroider true facts; that a freebooter named MacPherson was hanged in Banff in 1700 is a matter of record. It is a matter of belief, however, that he composed and played the rant which now bears his name. Alburger (1983) finds that there is no contemporary evidence that the outlaw was a fiddler, much less a composer: 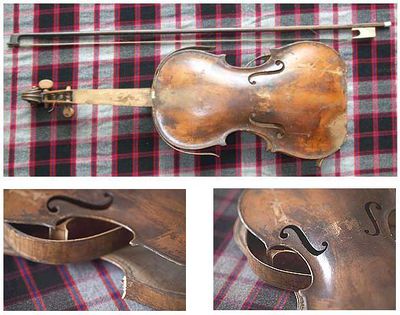 The broken fiddle in the Clan MacPherson museum.

Turning to the trial records, published in 1846, one finds this sole reference to MacPherson and anything musical: 'M'Pherson...wes one night in the house at that tyme, and drunk with the res, and danced all night.' The only musician mentioned in this account is Peter Broune, who 'went sometymes to Elchies, and played on the wiol' and 'got money sometyms for playing on the wiol...' (He may have been one of the 'Browns of Kincardine' referred to later in this chapter as early strathspey players and composers.) Nor is the earliest broadside helpful. 'The Last Words of James Macpherson, Murderer', printed about 1705, contains nothing about the dramatic gesture with which he is thought to have ended his life, and nothing about fiddling. Apparently there is a later version, which adds to the title the words 'To its own proper tune'. It is quite likely that the tune was written after the event to suit the broadside, for it fits the words perfectly...It may be that over the years traditional memory fused MacPherson's story with the musical facts about Peter Broune, who was on trial at the same time.

There is another legend also connected with the execution which states that the local powers that were, being cognicent that a reprieve was on the way, moved the town clock ahead one hour so that it would arrive only after the hanging. Neil (1991) reports that the magistrates of the town were punished for this perfidious act for many years in that they were forced to keep the town clock 20 minutes behind the right time, and remarks that even to this day jests are still made about the veracity of the time in Banff. Collinson (1966, pp. 210–211) also gives a similar thorough treatment of the legend of the highwayman and his melody.

Farewell, ye dungeons dark and strong,
The wretch's destinie!
MacPherson's time will not be long
On yonder gallows-tree.
Sae rantingly, sae wantonly,
Sae dauntingly gaed he,
He play'd a spring, and danc'd it round
Below the gallows-tree.

D.K. Wilgus, in his article "The Hanged Fiddler Legend in Anglo-American Tradition," finds evidence of an earlier MacPherson in Ireland with an almost identical story. He cites a chapbook called The Lives and Actions of the Most Notorioius Irish Highwaymen Tories and Rapparees, from Redmond O'Hanlon to Cahier Na Gappul, printed in Dublin in the early 19th century which contains a section entitled "Some Passages of the Life of Strong John Macpherson, a notorious Robber." The chapbook relates that the Irish highwayman, at the age of nineteen inherited:

A pretty little income, which he made a shift to spend in the company of pert women and gamesters, in less than three years, during which he was always a leading man at hurlings, patrons, and matches of foot-ball. He was accounted in his time the strongest man in the nation; he could hold a hundred weight at arms' length in one hand, and would make little or nothing of twisting a new horse-shoe round like a gad; yet notwithstanding all this activity he was soon reduced to poverty, and so, from one step after another, brought to the gallows. He was never known to murder anybody; nay he was very cautious of striking unless in his own defence; though in his time he committed more robberies single handed by far than Redmond O'Hanlon did, with whom he was acquainted, but with none of his gang. However, he was at last taken by treachery, and after being tried and found Guilty was dispatched by the common finisher of the law about 1678. As he was carried to the gallows, he played a fine tune of his own composing on the bagpipe, which retains the name of Macpherson's tune to this day.