Back to Madam Parisott's Hornpipe

MADAM PARISOTT'S HORNPIPE. AKA and see "Parasott Hornpipe," "Parisott's," "Whiskey Barrel." English, Scottish, American; Hornpipe (2/4 time). B Flat Major (Petrie): G Major (Wilson). Standard tuning (fiddle). AAB. The hornpipe was printed in Edinburgh by Robert Petrie in his Third Collection (1802) and it London dancing master Thomas Wilson in his 1816 collection A Companion to the Ball Room as "Parisot's Hornpipe." In America, it can be found in the 1817 collection of New York flute player and music seller Edward Riley as "Madam Parisott's Hornpipe." The slightly skewed title "Madam Parisol's Hornpipe" is the heading for the tune in Utica, New York, publisher William Williams' A New and Complete Preceptor for the Fife (1819). The melody appears under the title "Whiskey Barrel" in George P. Knauff's Virginia Reels, volume I (Baltimore, 1839).

Mademoiselle Parisot [1] (c. 1775 – after 1837) was a famous stage dancer and opera singer of the late 18th and early 19th century. Technically, she was 'Mademoselle Parisot', frequently referred to as 'Madam Parisot' although she did not marry until 1807, when she wed a Mr. Hughes, "an eminent florist-worker." She retired from the opera soon afterward. Parisot was, according to James Henry Leigh Hunt (1870) "very thin, and always smiling." William Makepeace Thackeray refers to her in the first chapter of Vanity Fair: 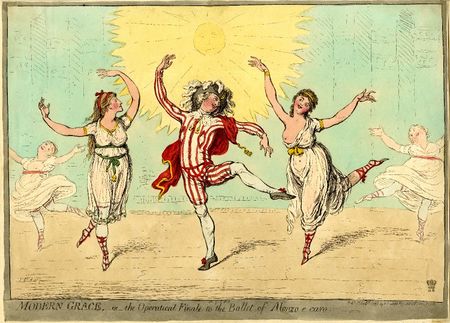 Mdm. Parisot on right, dancing with two other famous ballet dancers of the era, Charles Louis Didelot and his wife, Rose Didelot

For she could not only sing like a lark, or a Mrs. Billington, and dance like Hillisberg or Parisot, and embroider beautifully, and spell as well as a Dixonary itself, but she had such a kindly, smiling, tender, gentle, generous heart of her own, as won the love of everybody who came near her... 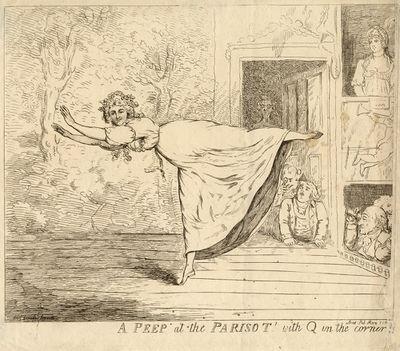 "A peep at the Parisot, with Q in the corner." (Q being the Duke of Queensbury)

She was famous, or infamous, for her provocative costumes, dancing in neo-classical garb that reportedly left one breast exposed. Whether or not this was true, she provoked strong criticism from some members of the aristocracy and episcopacy for the scanty costumes and risqué style of dancing. She also was criticized and caricatured for lifting her legs higher than was usual for a dancer, although her ability to remain horizontal the toe of one foot was genuinely admired.

Back to Madam Parisott's Hornpipe