Back to Major Graham of Inchbrakie[edit]

MAJOR GRAHAM (OF INCHBRAKIE). Scottish, Strathspey or Slow Strathspey. D Major (most versions): G Major (O'Farrell). Standard tuning (fiddle). AAB. Composed by Niel Gow (1727-1807) and published in both editions of his First Collection (1784 & 1801), although attributed to him only in the 2nd. The tune incorporates a similar motif to the second part of William Marshall's "Miss Admiral Gordon’s Reel, a Strathspey" (pub. in Marshall's First Collection, 1781, also known as "Of a' the airts the wind can blaw"), which has lead to charges (esp. by John Glen) of plagiarism against Gow. The melody was used by Robert Burns, who distinguished between the two pieces, as the tune for his song "Ah, Chloris, sine it may not be" and his first choice for his song "My Love is Like a Red Red Rose (2)" (which was replaced by G.F. Graham with the air associated with the song today--"Low Down in the Broom"). 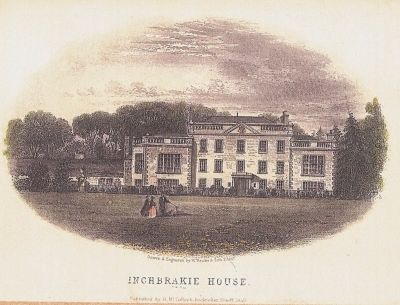 The Major Graham of the title was Patrick Graeme, 8th of Inchbrakie (1717-1796), who was a Captain in the 73rd Regiment of the Scotch Brigade in Holland. Patrick married Amelia Oliphant (daughter of Laurence Oliphant of Gask) in 1748. He was one of the jury for William Moray of Abercairney and then David Graeme of Orchill, but he died on his way to India in command of the 2nd Battalion of the 42nd Highlanders. The Gows wrote other songs for the Perthshire family, which is a cadet branch of the Grahams - see "Miss Graham of Inchbrakie," "Miss Margaret Graeme of Inchbrakie."

In 1715 Kate M'Niven lived a little down the river Shappie from the Manse, and was reputed a witch. One of the principal things agains her appears to have been in connection with Inchbrakie, where she had been a nurse. The laird one day rode over to Dunning, and, according to the usage of the times, carried his knife and fork with him. While at dinner he was annoyed by a bee buzzing about his ears, and he laid down the kife and fork to put off the annoyer, which flew out the window. On looking for the knife and fork, he found that they were amissing, and could not be found. On his return to Inchbrakie the nurse produced the missing articles. Some time thereafter she was lodged in 'durance vile,' tried and condemned for witchcraft, and burnt in the spring of 1715.

The manor at Inchbrakie has since been demolished.

Back to Major Graham of Inchbrakie[edit]