Marquis of Hastings (The)

Find traditional instrumental music
This is the stable version, checked on 13 October 2019.
Jump to: navigation, search

Back to Marquis of Hastings (The)

MARQUIS OF HASTINGS' STRATHSPEY, THE. AKA and see "Earl of Moira's Welcome to Scotland (The)," "Loudon's Bonnie Woods (and Braes)," "Lord Moira," "Lord Moira's Welcome to Scotland," "Old Aunt Katie (2)" (Pa.). Scottish, Strathspey. F Major. Standard tuning (fiddle). AABCCD. Francis Rawson-Hastings (1754-1826) was Lord Moira and became the 1st Marquis of Hastings in 1816. He was the eldest son of John Rawdon, the first Earl of Moira and was for most of his life a military man. First coming to prominence while serving with distinction in the British army during the American War of Independence (although he was noted for his severity and strong disciplinary attitude), he later fought in Belgium against the French in 1794. Rank and privilege attended him. He received a peerage in 1783; in 1803 he became Commander-in-Chief in Scotland; was made Master of Ordnance in 1806 and went to India in 1813 to replace Lord Minto as Governor-General. Hastings pursued a vigorous expansionist policy during his administration and extended considerably the frontiers of British India. The Marquess, and his wife Lady Flora (Mure Campbell, whom he married in 1804), were at the center of Calcutta society. He resigned in 1821, but in 1824 accepted the governorship of Malta. He died at sea in 1826. A curious footnote is that Hastings had promised his wife that they should lie in the same grave. As this could not in the circumstances be carried into effect, he desired his right hand to be amputated at his death and sent home, that it might be buried with the Marchioness. It was deposited in the family vault in Loudoun Kirk, and when she died in 1840 it was laid in the grave beside her body. 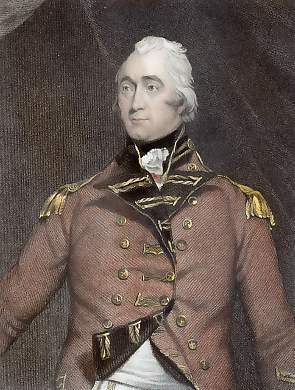 Louden/Loudoun was the Marquess's family seat in Scotland. The famous song "Loudoun's Bonnie Woods and Braes" is set to the tune known as "The Marquis of Hastings' Strathspey" or "Lord Moira's Welcome." The lyric by Robert Tannahill is said to commemorate Hastings' parting from his young wife to go on foreign service. It goes:

Loudoun's bonnie woods and braes.
I maun lea' them a,' lassie;
Wha can thole when Britain's faes
Would gi'e Britons law, lassie?
Wha would shun the field of danger?
Wha frae fame would live a stranger?
Now when Freedom bids avenge her,
Wha would shun her ca', lassie?
Loudoun's bonnie woods and braes
Ha'e seen our happy bridal days,
And gentle Hope shall soothe thy waes
When I am far awa', lassie.
"Hark! the swelling bugle sings,
Yielding joy to thee, laddie,
But the dolefu' bugle brings
Waefu' thoughts to me, laddie.
Lanely I may climb the mountain,
Lanely stray beside the fountain,
Still the weary moments countin,
Far frae love, and thee, laddie.
O'er the gory fields of war,
When Vengeance drives his crimson car,
Thou'lt maybe fa', frae me afar,
And nane to close thy e'e, laddie."
O resume thy wonted smile!
O suppress thy fears, lassie!
Glorious honour crowns the toil
That the soldier shares, lassie;
Heav'n will shield thy faithful lover,
'Till the vengeful strife is over,
Then we'll meet, nae mair to sever,
'Till the day we die, lassie;
'Midst our bonnie woods and braes
We'll spend our peaceful, happy days,
As blithe's you lightsome lamb that plays
On Loudoun's flow'ry lea, lassie.

Back to Marquis of Hastings (The)