Marquis of Tullibardine (The)

Find traditional instrumental music
This is the stable version, checked on 26 April 2021.
Jump to: navigation, search

Back to Marquis of Tullibardine (The)

MARQUIS OF TULLIBARDINE, THE. AKA – "Marquis of Tullybardine (The)." AKA and see "Great Eastern Reel (2)." "Maids of Tulla," "Merry at the Fair." Scottish (originally), Canadian; Reel. Canada, Cape Breton. A Major/Mixolydian. Standard or AEae (Cape Breton) tunings (fiddle). One part (Gow, Johnson): AB (Honeyman, Lowe, Skinner, Skye, Surenne): AAB (Dunlay & Greenberg): AA'BB' (Athole, Kerr): ABCD (McGlashan Collection). A very popular "double-tonic" composition, even to modern times, by John Crerar (1750–1840), according to J. Scott Skinner in The Scottish Violinist (1900). It has proved the primary contribution of Crerar's to the Scottish traditional fiddle repertory. Crerar was the head gameskeeper on the Atholl estate, who probably knew, and may have had lessons from, the famous Scots fiddler-composer Niel Gow (1727–1807) of Inver, Perthshire. The melody was published in Alexander McGlashan's collection of 1786 as "The Marquis of Tullybardin's Reel." "Merry at the Fair" is the title of the reel in the MacKercher Collection (c. 1830). A cognate version of the tune, called "Great Eastern Reel (2)" attributed to A.W. Doig, appears in Köhler's Violin Repository, Book 1 (1881). See also Irish versions as "White Leaf (The)" and "Tinker's Bib (The)." 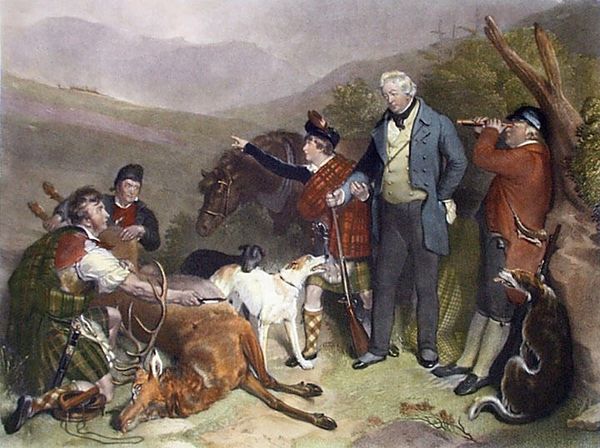 "Death of a Stag," engraving from a painting by Edwin Landseer, depicting the 4th Duke of Atholl with his son. Composer and gamekeeper John Crerar and his own son, Charles, are at left.

The lords of Tullybardine, Perthshire, were the Murray family, who acquired the Earldom of Atholl in 1629. The title Marquis of Tullibardine eventually devolved to the eldest sons of the Dukes of Atholl. The Murray family's roots were originally Flemish and Lowland Scottish, and they amassed a considerable fortune in real estate and goods, including some 200,000 acres in Atholl itself. The most famous Marquis of Tullibardine in the 18th century was William Murray, and it was in 1745, when James, the 2nd Duke of Atholl, was away in London, that Bonnie Prince Charlie landed in Scotland and the summoned support for his rising. One who responded was James's brother William, who assumed the rights and privileges of the Dukedom in his brother's absence. Murray had been attainted for his part in the 1715 Jacobite rising, and, loyal to the Jacobite cause even though elderly and rather unwell, was one of the 'Seven Men of Moidart' who welcomed the Prince to Scottish shores. William entertained Prince Charlie at Dunkeld House when the Young Pretender marched toward Edinburgh, and among the performers was Niel Gow (1727–1807). The Marquis hoped to raised several thousand men in the Prince's cause from among the Atholl tenants, but on succeeded in attracting 500 rather tentative souls for the cause. Gow may have been among them, for it is said he spent some days with the army before he deserted (as did most of the other Atholl tenants) for the safety of Inver.

John Crerar's researcher, Eilidh Scammell, identifies the Marquis of Tullibardine of Crerar's title as John Murray, the second child and eldest son of John Murray, 4th Duke of Atholl, who later became the 5th Duke in 1830. Scammell believes Crerar composed the tune around 1778, in celebration of the birth of the 4th Duke's first son that same year[1].

Back to Marquis of Tullibardine (The)