Find traditional instrumental music
This is the stable version, checked on 2 October 2020.
Jump to: navigation, search

Back to Merch Megan 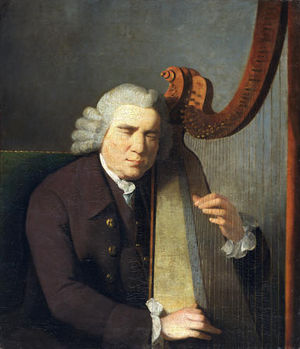 The tune is said to appear in John "Blind" Parry's (1710-1782) Twelve Airs for one and two Guitars, 1781 edition, and also his British Harmony of the same year. Parry (Parri Ddall, or Blind Parry) was born in about 1710 on Pen Lion, Gaernafonshire, Wales, blind from birth, and as a child found a patron in the Griffiths family who initially gave him a Welsh triple harp and support for mastering it. He later became harpist to Sir Watkin Williams-Wynn at Wynnstay, Ruabon, and where he perfected his baroque composing. Willams-Lynn periodically brought him to his residence in London bringing his music and playing to a wider audience. In fact, his harping was admired by George Frederich Handel (who resided in England as court composer to George II), and Parry played the great composer's Concerto in B flat at Hickford's Great Room in Brewer Street, Soho. Parry died in 1782. Edward Jones, Harpist Laureate to George IV, included it in his book The Bardic Museum (1802) under the title "Wyres Megan." Harpist Henry Humphreys won the prize of the Silver Harp at the Welshpool Eisteddford in 1824 for his rendition of this tune. Ludwig van Beethoven composed music for an art song by this title. Lyrics, translated by John Oxenford (Cole, Folk Songs of England, Ireland and Wales, New York, 1961), begin:

I see her in my dreams, she trips to me lightly,
With joy on her lips she whispers my name.
Her eyes look in mine, so fondly, so brightly,
I wake an 'tis then no longer the same.
Her glance then is chilly, her step seems to shun me,
The lips that have smiled wear the curl of disdain;
Oh! Megan's fair child my love hath undone me,
But yet in my dreams I'd see thee again.


Back to Merch Megan