Midnight on the Water

Find traditional instrumental music
This is the stable version, checked on 22 March 2022.
Jump to: navigation, search

Back to Midnight on the Water 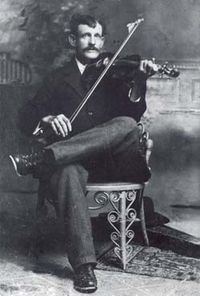 This popular composition is usually credited to Texas fiddler Luke Thomasson, although it has been published that Luke's son Benny (a famous Texas-style fiddler who popularized the melody) long remembered the night he heard both his father and uncle composing the tune on the family porch (c. 1900?). Several sources have noted this tune's resemblance to an Oklahoma-collected tune called "Old Paint," and there is an ongoing debate about whether "Midnight" is derivative of "Paint" (or vice versa). The Library of Congress recording "Cowboy Songs, Ballads, and Cattle Calls from Texas" (LOC lp L28), collected by John A. Lomax and edited by Duncan Emrich, has a version of the "Paint" song by Jess Morris which has quite similar melodic material with "Midnight on the Water." The liner notes to the album point out that Morris was born in 1878 and would perhaps have been contemporary with the Thomassons, who, like Morris, lived in the Texas panhandle.

Back to Midnight on the Water