Back to Mill Oh (The)[edit]

MILL OH, THE. AKA - "The Mill," "Mill Mill O (The)," "Mill Oh the Mill (The)." AKA and see "Cuba March (The)," "Soldier's Return (The)," "Blue Eyed Stranger (1) (The)." Scottish, English. England, Northumberland. D Major. Standard tuning (fiddle). AB: AAB (O'Farrell). "The Mill Oh" or "The Mill Mill O" was a popular tune common to collections printed in the 18th and early 19th centuries, printed by Allen Ramsay, but likely predating him. The air to the song is that to which Robert Burns in 1793 set "The Sodger's (Soldier's) Return" ("The Poor and Honest Soldier"). See also the closely related "Deadly Wars (The)" and "Poor Soldier (2)." Burns' poem is a reworking of a folk theme, popular since Homer's Ulysses, of lovers parted by war -- when the man returns he is not recognized but finds his love has been true, reveals himself and is happily reunited. It begins: 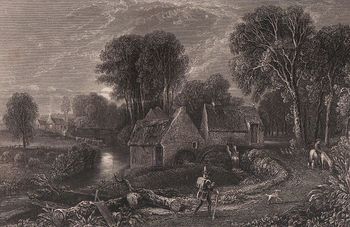 Millmannoch is the mill of the "Soldier's Return" by Burns, written whilst at Ellisland Farm. Discharged soldiers of the Royal North British Fusiliers made their way back home from the depot at Dumfries via this old road to the Ayr depot and Burns wished to feature this regiment in his ballad (Wikipedia [1]).

When wild war's deadly blast was blawn,
And gentle peace returning,
Wi' mony a sweet babe fatherless,
And mony a widow mourning;
I left the lines and tented field,
Where lang I'd been a lodger,
My humble knapsack a' my wealth,
A poor but honest sodger.

As I came down yon water side
And by yon Shillin Hill, O,
There I spied a bonny lass,
A lass that I loed right weel, O.

Then she fell o'er, an' sae did I,
An' danc'd the millars reel, O,
Whene'er that bonny lassie comes again,
She shall hae her ma't ground weel, O.

Bayard (1981) believes that "Quaker's Wife (The)/Merrily Danced the Quaker" grew out of this tune, or else both tunes stem from an ancient original, primarily because of the "unmistakable" similarity of the 'B' parts, and the "noticeable" resemblance of the 'A' parts. The title appears in Henry Robson's list of popular Northumbrian song and dance tunes ("The Northern Minstrel's Budget"), which he published c. 1800. Glen reported it was first printed by William Thompson in his 1725 Orpheus Caledonius (No. 20); it also appeared in Thompson's 1733 edition (vol. 1, p. 40).

Back to Mill Oh (The)[edit]