Find traditional instrumental music
This is the stable version, checked on 13 July 2020.
Jump to: navigation, search

Back to Miss Gunning's Reel

MISS GUNNING'S FANCY REEL. AKA and see "Contradiction Reel (1) (The)." AKA - "Miss Gunning's Fancy." English (originally), Scottish, Irish, Canadian; Reel. England, Northumberland. Canada, Cape Breton. A Major (Cole, Marshall): B Flat Major (Vickers). Standard tuning (fiddle). ABBCD (Cole): AABBCC (Marshall, Vickers): ABCCD (Kerr). The tune is sometimes credited to William Marshall (1748-1833) due to its inclusion in Marshall’s Kinrara Collection (1800), really only a sheet printed on both sides. Marshall’s tune “Kinrara” appears along with another tune by the Duke of Gordon and some ‘filler’ tunes, of which “Miss Gunning’s” is one. It is unlikely that Marshall composed it however, for it appears in William Vickers’ Northumbrian manuscript collection of 1770, when Marshall was only age 22. "Vicker's setting is less developed, the others being in A (Major) and making effective use of the open 'a' string of the fiddle, but his syncopation is noteworthy" (Seattle). In fact, the earliest publications predate Vickers, for it appears in Thompson’s 1st Collection of 200 Country Dances (London, c. 1758, reissued in c. 1764 and c. 1780), David Rutherford’s 1st Collection of 200 Country Dances (c. 1756), and John Johnson’s 6th Volume of 200 Country Dances (c. 1751)—Marshall would have been a baby. The melody also appears in Longman and Broderip's 2nd Collection, London, c. 1792. See “Contradiction Reel (1) (The)” for Irish, American and Canadian versions, generally more elaborate variations. 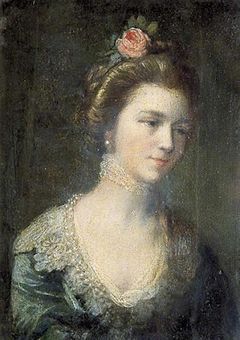 It turns out that there were actually two Miss Gunnings--sisters Maria (1732-1760) and Elizabeth (1734-1790), who in the early 1750’s became the toast of London and whose rags-to-riches story that captured the imagination of Georgian-era Britain. They were the daughters of John and Bridget Gunning of Castle Coote, County Roscommon, the grand-daughters of Theobald Burke, 6th Viscount Mayo, on their mother’s side. Interestingly, the girls were the great-great-great granddaughters of the female Irish pirate Grace O’Malley, one of the few men or women who successfully stood up to Queen Elizabeth I, and a grand story in itself. However, the Irish family had fallen on very hard times, especially when the girls were young, and as they grew they dreamed of taking to the stage. Even when young they were known as ‘the handsomest women alive’, blessed with wit and grace, and it was said their fine complexions came from taking the waters of St. Brigid’s Well at St. Brigid’s Church in Roscommon. When they were first presented to the Lord Lieutenant, at Dublin Castle, a kindly woman named Peg Woffington had to lend them the clothes in which to appear. 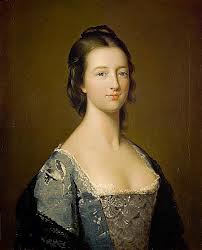 Instead of a career on the stage, however, they traveled to London, where they soon became as renowned there as they had been in Ireland. During the Gunnings’ hey-day in the early 1750’s, high and low, rich and poor, worshipped at the shrines of these Venuses. They were mobbed at their doors by the multitude eager to catch a sight of them and crowds would descend upon London theaters at the rumor that the sisters would attend that night. Within one year of their arrival they skillfully parlayed their celebrated beauty into marriages to the most eligible and noble bachelors in Britain. Maria married an earl in 1752 and became Lady Coventry, while Elizabeth followed with a wedding a month after her older sister Maria, and became the Duchess of Hamilton. Not only were the marriages social coups for the once-destitute sisters but they both re-established their fortunes, as their husbands were counted among the richest families in the country. The fame of these matches was such that in Ireland, according to Horace Walpole, a common blessing of the beggarwomen was:-" May the luck of the Gunnings attend you !" One London gossip wrote in a letter (with all the fervor of a romance novel):

The event that has made most noise since my last is the extempore wedding of the youngest of the two Gunnings, two ladies of surpassing loveliness, named respectively Mary and Elizabeth, the daughters of John Gunning, Esq., of Castle Coote, in Ireland, whom Mrs Montague calls "those goddesses the Gunnings." Lord Coventry, a grave young lord, of the remains of the patriot breed, has long dangled after the eldest, virtuously, with regard to her honour, not very honourably with regard to his own credit. About six weeks ago Duke Hamilton, the very reverse of the earl, hot, debauched, extravagant, and equally damaged in his fortune and person, fell in love with the youngest at the masquerade, and determined to marry her in the spring. About a fortnight since, at an immense assembly at my Lord Chesterfield's, made to show the house, which is really most magnificent, Duke Hamilton made violent love at one end of the room, while he was playing at Faro at the other end; that is, he saw neither the bank nor his own cards, which were of three hundred pounds each: he soon lost a thousand. I own I was so little a professor in love that I thought all this parade looked ill for the poor girl; and could not conceive, if he was so much engaged with his mistress as to disregard such sums, why he played at all. However, two nights afterwards, being left alone with her, while her mother and sister were at Bedford House, he found himself so impatient that he sent for a parson. The Doctor refused to perform the ceremony without license or ring; the duke swore he would send for the archbishop; at last they were married with a ring of the BED-CURTAIN, at half-an-hour after twelve at night, at May-fair Chapel.

Alas, beauty has its price. The prevailing fashion of the period demanded white skins and red rouged cheeks, and lead was used as the basis of many cosmetics. The noxious effect of the lead caused skin eruptions, which encouraged ladies to powder their skins more vigorously to mask these unsightly blemishes. Several ladies of fashion thus poisoned themselves (see also "Kitty Fisher"), the most famous of whom was Maria, who died in 1760 at the age of 28.

Elizabeth fared rather better. Her first husband died within several years of their marriage, and Elizabeth then wedded John, the fifth Duke of Argyll, in 1759, assuming the dual title of Duchess of Hamilton and Argyll. She became a celebrated socialite in Scotland, and the couple remained married until her death in 1790. Both Duke and Duchess were subscribers to Robert Burns Poems, although the poet became famously annoyed at the couple. Burns arrived at Inverary, Scotland, in June 1787, when it happened that the Duke of Argyll had a large house party. The inn-keeper was too busy attending to the Duke's guests to have time for passing travelers. Burns is supposed to have scrawled his 'On Incivility shown him at Inverary' on one of the inn windows:

"Whoe'er he be that sojourns here,
I pity much his case —
Unless he come to wait upon
The Lord their God, "His Grace...."

Back to Miss Gunning's Reel