Back to Miss Hope of Pinkie House’s Strathspey[edit]

MISS HOPE OF PINKIE HOUSE'S STRATHSPEY. Scottish, Strathspey. D Major (fiddle). AB. Pinkie House [1] is a mansion built around a three-story tower house, located in Musselburgh, East Lothian, Scotland. Long occupied by the Hay family, it was sold in 1778 to Sir Archibald Hope (1735–1794), 9th Baronet of Craighall, in Fife, following which it became his primary residence. 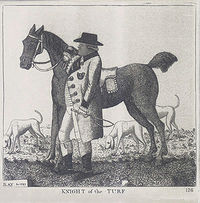 Archibald Hope, "Knight of the Turf", by John Kay

Hope and his two wives had several children, but possibly two girls survived; Margaret was his eldest child by his first wife, Elizabeth Macdowall, and Magdalen (1792-1873) by his second wife, Elizabeth Patoun. Anderson (The Scottish Nation) gives: "Sir Archibald was secretary to the board of police in Scotland for life, and on the abolition of that board, he received a compensation for the office which he held under it. He devoted himself to the improvement of his lands, and established extensive and profitable salt and coal works on his estate. He resided chiefly at Pinkie House, and was a member of the Caledonian Hunt, of which honourable club he held the office of president in 1789. In Kay's 'Edinburgh Portraits' there is a characteristic etching of Sir Archibald Hope as "Knight of the Turf." Anderson says there were five girls from the first marriage and one from the second, and one of them may be the one the strathspey's title refers to.

Back to Miss Hope of Pinkie House’s Strathspey[edit]