Find traditional instrumental music
This is the stable version, checked on 26 August 2022.
Jump to: navigation, search 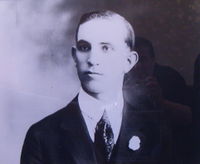 Morrison did not compose the jig but rather obtained it from a Dromlacht, County Kerry, accordion player (a member of his band) named Tom Carmody who knew it as "Stick across the Hob (The)" (Taylor, 1992). Carmody in turn had learned it from his father, Maurice. Harry Bradshaw relates the story that the tune was supposed to have learned by Morrison the night before the recording session, and was to be called "Maurice Carmody's Favourite" on Morrison's 1936 Columbia recording, but that the record company's proofreading was not what it should have been and one batch which was labelled "Maurice Comedy's." [Morrison frequently paired the jig in a medley with "Richard Brennan's Favorite"]. O'Neill (Waifs and Strays, 1922) prints the melody as "Paddy Stack's Fancy Jig," named for the Chicago fiddler (originally from County Kerry) who made some 78 RPM recordings in the 1920's. "Morrison's Jig (1)" is not to be confused with the similarly-titled "Morrison's Fancy," however, it is sometimes aurally confused with "Whelan's Jig," which it resembles. See also "Morning Dew (1) (The)" for a related setting of the melody in reel time.

The tune was picked up by 'revival' musicians in the 1979's, and in the Northern United States it has since been a popular vehicle for contra dances.