Back to Mrs. Ramsay of Barnton (1)[edit]

MRS. RAMSAY OF BARNTON [1]. Scottish, Slow Strathspey. B Flat Major. Standard tuning (fiddle). AABB. The title may refer to Janet Mansfield, wife of William Ramsay of Barnton, a wealthy man who was a dominant figure in one of Edinburgh’s two private banks and a very substantial shareholder in the Royal Bank of Scotland. In 1781 Ramsay bought the estate of Barnton and Cramond Regis (the grounds of what is now Davidson’s Mains Park), demolished the old house and built a grander one on the site. Cramond Regis, the old name for the area, was an ancient hunting seat of Scotland’s kings. It may also have been named for the wife of their son, George Ramsay, who married the Hon. Jean Hamilton, daughter of Robert Hamilton, 6th of Wishaw and Susan Balfour. The couple wed in 1791. 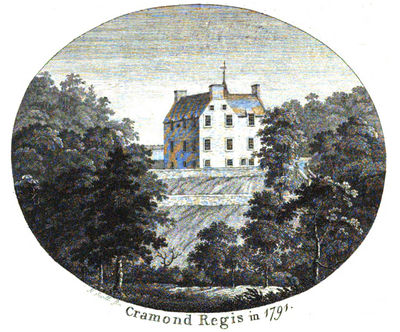 Barnton is in Midlothian, Scotland, and was actually two adjoining estates that had been combined (the other being named King's Cramond or Cramond Regis, said to have been a royal hunting seat in ancient times). Around 1794 William Ramsay commissioned Robert Adam to remodel and extensively extend King’s Cramond for his son, George Ramsay. Once the work was complete Barnton was no longer required, and around 1800 it was demolished, however, King’s Cramond was renamed Barnton House on the combined estate, although this house was also demolished, around 1920.

Back to Mrs. Ramsay of Barnton (1)[edit]