Find traditional instrumental music
This is the stable version, checked on 2 December 2020.
Jump to: navigation, search 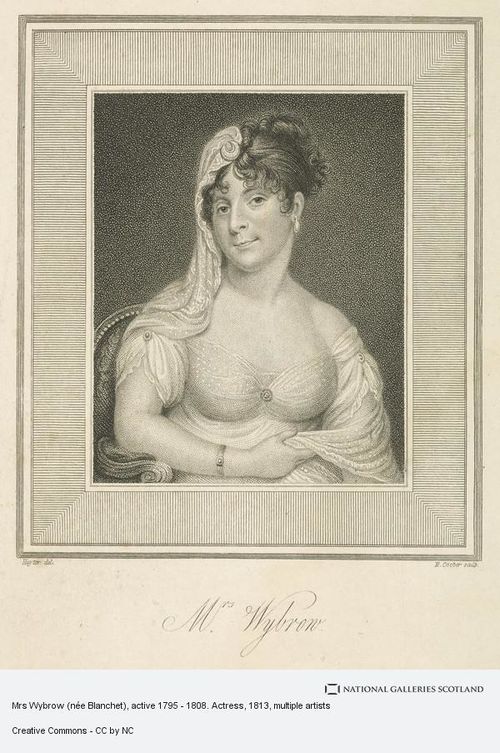 Mrs. Wybrown, by Richard Cooper.
MRS. WYBROW'S NEW BROAD SWORD HORNPIPE. AKA and see "Circus Hornpipe." Scottish, English; Hornpipe (2/4 time). A Major. Standard tuning (fiddle). AABBCCDD. "Mrs. Wybrow's New Broad Sword Hornpipe" was composed by James Sanderson in 1799 and published by him on single-sheet issues. Mrs. Wybrow (née Blanchet) was, like Miss Adams, Miss Gayton and others, a stage dancer and actress who flourished from 1795 to 1810 or so, who specialized in solo hornpipe dancing for the stage. Sanderson composed this piece expressly for her signature dance, which she performed at Covent Garden Theatre, Sadler's Wells and other venues, one of which was John Astley's famous Royal Circus, where she was a primary dancer for many years (hence Thomas Wilson's titling of the tune as "Circus Hornpipe"). She played in pantomimes, farces, or violent or sentimental melodramas; as the recurring character Columbine in The Enchanted Harp; or, Harlequin for Ireland and other harlequinade melodramas she "had no equal"[1]. He death was reported in Gentleman's Magazine in February, 1808, but a news item dated in March denied that "the fascinating and agile Columbine" had departed and asserted that she would, indeed, make her appearance the next day for Mr. Cross's benefit. She did recover, for she was billed in 1810 as a member of the company at the Sans Pareil Theatre (Covent Garden Company) appearing with actor John Peter Bologna (1775-1846) as Columbine and Harlequin.

There are other 'Broad Sword Hornpipes' as well, taught by period dancing masters. Regency era dance and music researcher Paul Cooper writes that the broadsword hornpipe may have been a comic dance, "perhaps performed in faux-armour," that may have been derived from or otherwise connected to fencing or military drill, presumably danced with elegance and refinement when interpreted for the stage[2]. It was recorded by the Morning Post of June 29th, 1803, that "Mrs. Wybrow's Hornpipe" was performed by the Honorable Mr. Stanhope, the nine-year-old son of Lord Harrington, as a before-ball entertainment at the Duchess of Gordon's ball on Monday, June 27th, 1803, at Fife House in Privy Gardens. This would have been the choreographed stage dance, presumably taught to young Mr. Stanhope by his dancing instructor.