(MY) AIN KIND DEARIE (O). AKA and see "Lea Rig (The)," "Lea Rigges (The)," "Oh lassie art thou sleeping yet?" "Wedding (3) (The)." Scottish, English, Canadian; Reel, Slow March and Air. England, Northumberland. Canada; Prince Edward Island, Cape Breton. G Major (O'Farrell, Straight & Skillern, Walsh): A Major (Davie, Miller, Young): A Mixolydian (Bremner). Standard or AEae (Cape Breton) tunings (fiddle). AB (most versions): AAB (Davie): AABB (Bremner, Miller, Perlman, Straight & Skillern): AABBCCDD (Young). A popular 18th century melody, this tune appears the Gillespie Manuscript of Perth (1768, p. 55), Robert Bremner's 1757 collection (Scots Reels or County Dances, Edinburgh, p. 76), and the Drummond Castle Manuscript (in the possession of the Earl of Ancaster at Drummond Castle), inscribed "A Collection of Country Dances written for the use of his Grace the Duke of Perth by Dav. Young, 1734." Captain Francis O'Neill (1922) finds "an elaborite arrangement with 12 bars in each part appears in McGoun's Repository of Scots and Irish Airs, Strathspeys, Reels, etc., published in Glasgow about 1803." There are also resemblances between this tune and "Christmas Eve (1)," "Our President," "Here's a health to our leader," "Fearless Boys (The)," and the 1st part of Bayard's Pennsylvania collected "Hell Broke Loose in Georgia (2)." The title (as well as the alternate title "Lea Rig (The)," by which it is also commonly known) comes from the words set to the tune in common use in the countryside of Scotland in the 18th century. They begin: 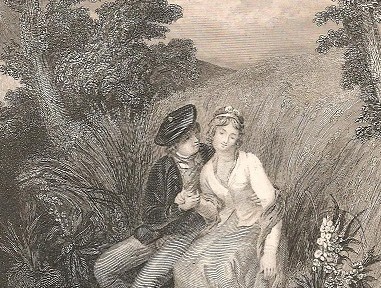 Scots poet Robert Burns adapted the melody to his song of the same title, which is close to the setting given in Cranford (1995). Cape Breton settings of "My Ain Kind Dearie," such as played by Joe MacLean, Dan Hughie MacEachern and others, were rendered in multiple parts (six to eight) in 'raised-bass' tuning (AEae), according to Cranford, who thought the variations likely evolved from ones similar to those given in Charles MacLean's 1774 publication A Collection of Favourite Scots Tunes with Variations for the Violin. The tune was often played in Scotland in scordatura tuning (AEae), as directed, for example, in James Gillespie's A Collection of the Best and Most Favourite Tunes for the Violin (Perth, 1768). Irish versions of the melody can be found under the titles "Have you seen or have you heard," "Sweet Innisfallen" and Lover's "Widow Machree." It has long been a favorite of Northumbrian pipers, who have composed numerous variation sets.