Find traditional instrumental music
This is the stable version, checked on 1 May 2022.
Jump to: navigation, search

Back to My Darling Asleep 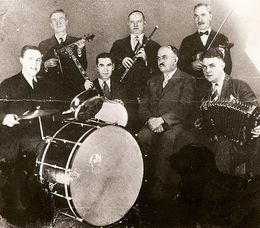 MY DARLING ASLEEP (Mo muirnin 'sa codlad). Irish, Double Jig (6/8 time). D Major. Standard tuning (fiddle). AABB (most versions): AABBCC (Harker/Rafferty). A popular Irish session tune; so much so, in fact, that it is sometimes seen as hackneyed, leading some wags to call it "My Darling's a Sheep." Chief Francis O'Neill originally collected the tune from Abram Beamish as "My Darling in Bed," but amended the title when he included it in MOI so as to preclude any suggestive connotations. In a letter[1] to Bernard Bogue (5/28/1917) O'Neill wrote:

A rare tune unknown to all of us named “My darling in bed” was noted down from the playing of Abram S. Beamish (born within 5 miles of my birthplace in West Cork). For obvious reasons the title was modified to "My Darling Asleep."

Robin Williamson's source for the tune, Leo Rowsome, died in 1970 after establishing himself as a key figure in Irish piping, both as a player and maker of pipes. Rowsome recorded the jig in 1948, but the first sound recording of "My Darling's Asleep" was by Dan Sullivan's Shamrock Band, in 1929. Sullivan's band recorded some 106 sides in the 78 RPM era, a prolific output. Personnel included Sullivan on piano, Murty Rabbett on piccolo, Neil Nolan on banjo, and George Tapley on accordion.

Additional notes
Source for notated version : - piper Leo Rowsome (Ireland) [Williamson]; Abram Sweetman Beamish, a native of the adjoining parish to that of Caheragh, County Cork, where Francis O'Neill was born--although O'Neill got seven tunes from Beamish, only the "Fairhaired Boy (1) (The)" and "Tie the Bonnet" were previously known to him despite their common place of origin [O'Neill]; set dance music recorded at Na Píobairí Uilleann in the late 1980's [Taylor]; New Jersey flute player Mike Rafferty, born in Ballinakill, Co. Galway, in 1926, who had his unusual three-part version from fiddler Aggie Whyte [Harker].


Back to My Darling Asleep