Back to My Love Nell[edit]

MY LOVE NELL. AKA and see "Sliab na mBan (3)," "Star of the County Down." Irish, Air (whole time). B Minor. Standard tuning (fiddle). AB. A popular and enduring Irish air now almost universally known under the "Star of the County Down" title. The tune also appears as an untitled Jig in Breathnach (CRÉ II), 1976; No. 90, p. 47, and is thought (by Breathnach, for one) to be a derivative of the Scottish "Gilderoy (2)" melody.

"My Love Nell" was 19th century song claimed by various people. One version (published by John Church Company) is identified as "an Ulster Ballad" by Charlotte Milligan Fox (1860-1916) ("sung by David Bispham)" [1], while another was credited to ("written and sung") William Carleton, for the blackface minstrel stage [2]. The latter is apparently meant to be sung by white performers in blackface, in a caricature of an Irish immigrant song and was advertised as a "serio-menti-sental" comic song. It begins: 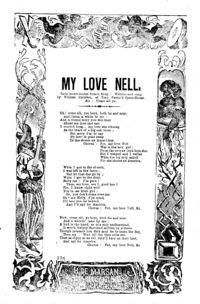 Oh! come all, you boys, both far and near,
And listen a while to me;
And a dismal story you will hear
About my love and me.
I courted long...my love was sthrong [sic]
As the heart of a big oak three [sic]
But sorry I'm to say
My love is gone away
To the shore av Amer-i-kay.

Cho:
For, my love Nell
Was a charmin' girl;
From the cove av Cork kem she.
But I weeped and I vailed [sic]
When the big ship sailed
For the shores av America. 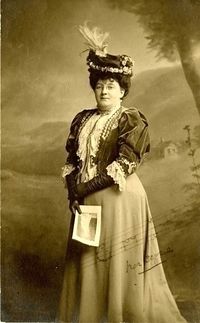 The Fox and Carleton versions differ little from each other, save for nuances in language (The Fox version begins: "Come all ye boys both far and near, And a cushla listen to me,..."). Fox, at least, had some bonafide credentials: born in County Tyrone, she founded the Irish Folk Song Society in 1904 and published Annals of the Irish Harpers (1911), edited from the Bunting papers.

Back to My Love Nell[edit]