Back to My Silly Auld Man[edit]

MY SILLY AULD MAN. AKA and see "Before I Was Married (2)" "Billy O'Rourke's Jig (1)," "Black Rogue (1)," "Come Under My Plaidie," "Johnny MacGill," "Johnnie McGill," "Johnnie MacGill." Scottish, Jig. F Major. Standard tuning (fiddle). AABB and variation sets. The tune appears in the 1794 collection of Capt. Robert Riddell (1755-1794) of Glenriddell, Laird of Friar's Carse, near Dumfries, Scotland. He was a friend of his neighbor, Robert Burns (1759-1796, who at the time was a tenant farmer), and the poet visited Friars' Carse frequently, describing the estate as 'positively the most beautiful spot in the lowlands of Scotland'. A cordial relationship continued until they had a falling out the year before Riddell issued his publication; it was over a drunken incident at Friar's Carse, although details remain mysterious. 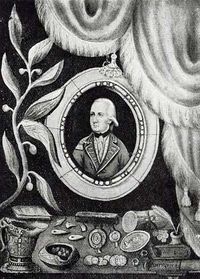 Robert Riddell, from a frontispiece drawing in one of the manuscript volumes in library of the Society of Antiquaries, London

The tune has roots in both Scotland and Ireland, and numerous variants are extent. However, Riddell attributes the tune to "John MacGill, town piper of Girvan."

Back to My Silly Auld Man[edit]