MY TOCHER'S THE JEWEL. AKA and see "Bundle and Go," "High Way to Edinburgh (The)," "Lord Elcho's Favourite." Scottish, Jig. A Minor. Standard tuning (fiddle). AABB. The tune, under the "My Tocher's the Jewel" title, is attributed to Scottish bandleader, composer, musician and music publisher Nathaniel Gow [1] ( (1763–1831)). 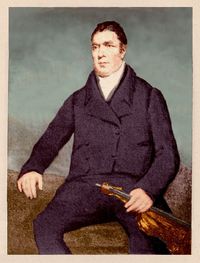 The melody may have been taken at some time from "Muckin' of Geordie's Byre (The)," at least according to Scots national poet Robert Burns who in a Cromek's Reliques (1808) called Niel Gow's (or "Niel Gow & Son's") claim of authorship 'notorious.' His opinion was seconded by the collector John Glen (1895), who, however, did not blame Niel but his son Nathaniel Gow. Nathaniel defended himself a year after Burns' accusation by protesting that no composer's name was attached to the melody in the Gow collections, and that, in any case, "My Tocher's the Jewel" could be found as an untitled quick jig in Oswald's Caledonian Pocket Companion (book III, p. 28). Glen (1895) points out it can also be found, long before Nathaniel's time, in James Aird's Selection of Airs and Marches (1st edition) under the name "High Way to Edinburgh (The)." Oswald's quick jig also was given another use by Gow who thought it a pretty tune when played slow, and, since it did not have a name, he titled it "Lord Elcho's Favourite." Robert Burns himself wrote a lyric called "My Tocher's the Jewel," contributed to James Johnson's Scots Musical Museum, to the tune of the related "The Highway to Edinburgh." Cazden (et al, 1982) identify these tunes as belonging to the protean 'Lazarus' family of airs, which include the famous Irish tune "Star of the County Down" and the Scottish "Gilderoy."