Find traditional instrumental music
This is the stable version, checked on 14 September 2021.
Jump to: navigation, search

Back to Nancy Blevins 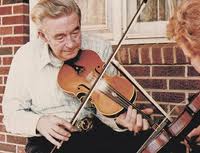 That was one that my grandfather--he had a cousin named Nancy Blevins...and it was back just after the Civil War for he said he could remember dancing to that tune with a dress on, and boys would a dress for a couple years like little girls did back then. But this tune--this girl had made up this tune of Nancy Blevins. She was a great fiddler. I tried to find out something about her through some people that lived down there, but the man was not old enough to know anything about it. My grandfather could remember one verse that went into the tune. "I've played this fiddle till it cramps my hand, nary another tune till I get another dram.

Kerry says, "From the interview, it looks like his grandfather died when he was 84, sometime in the early (19)40s." There was an actual Nancy Blevins. Carl Barron searched and found a family history in which it was recalled that "Nancy used to play the fiddle and would play at the Healing Springs Hotel." The history recorded: "1. son of William (Bolen Bill) Baker married Nancy Blevins (11/5/1852 - 1/30/1939) daughter of Alvis and Martha Blevins on 4/27/1871 in Ashe County by R.K. Pearce, Justice of the Peace."

The tune is similar in the first strain to another tune by a regional fiddler, Norman Edmonds, called "Hawks and Eagles."

Back to Nancy Blevins