NELSON'S PRAISE. AKA and see "Princess Royal (1)." AKA - "Bold Nelson's Praise." English, Morris Dance Tune (4/4 time). G Major. Standard tuning (fiddle). AABCBCB. The tune was collected in the village of Ilmington, Warwickshire, England, and is titled in honor of Admiral Lord Horatio Nelson, the hero of a number of naval battles, including the Battle of the Nile (1798) and Trafalger (1805). The melody is a version of an air often attributed to harper Turlough Carolan called "Princess Royal (1)", which was adapted by English composer William Shield for his song, "The Saucy Arethusa" (1778), one of the songs in the ballad opera The Lock and Key (1796). The melody was also printed in London by John Walsh under the title "Princess Royal: the New Way (The)." 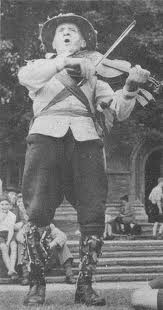 Source for notated version: fiddler and dancer Sam Bennet (Ilmington, Warwickshire), collected by Kenworthy Schofield. Bennet was active from before the 20th century to about 1945.