Find traditional instrumental music
This is the stable version, checked on 5 December 2020.
Jump to: navigation, search

Back to New Mown Meadows (The) 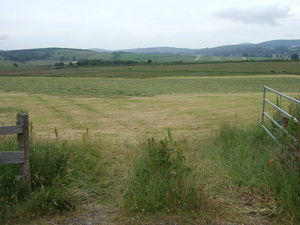 NEW MOWN MEADOWS, THE. AKA and see - Anderson's Reel (2), Miss Lane's Fancy, Old Silver Spear, Threepenny Bit (The), Top of the Cliff (The), Silver Tip (1) (The), My Love is on the Ocean (1), Silver Spear (The), Holly Bush (5), Joe Mháire Mhicilín. Irish, Reel. A Dorian: D Dorian {Joyce}: E Dorian ('A' part) & A Mixolydian ('B' part). Standard tuning (fiddle). AB (Joyce): AA'BB' (Moylan). There are different versions of this tune, although generally it is played in either the keys of A Dorian or E Dorian, less frequently heard in D Dorian. The tune is often associated with "Silver Spear (The)," which it resembles, especially in the second strain. It is currently popular in County Clare and has been a favorite of melodeon players.

"Written from memory," says P.W. Joyce, who collected in Munster in the mid-1800's and first published the tune. This is the same period (and, broadly, region) that Church of Ireland cleric James Goodman (1828-1896), of Cork, collected in, and he included the melody twice in his manuscript collection, albeit under the titles "Top of the Cliff (The) and "Silver Top (The)." See also Donegal fiddler Néillidh Boyle's version "Loughnamure Tune (The)," the related "Five Mile Chase (2)" by Donegal fiddler John Doherty, and Francis O'Neill's variant "Threepenny Bit (The)." See also the similar "Pat Canny's."

Back to New Mown Meadows (The)