Back to New River Train[edit]

NEW RIVER TRAIN. AKA – "Green River Train." Old-Time, Breakdown & Song. USA; Western N.C., Southwestern Va. D Major. The song "New River Train" is thought to have been associated with one of the railroad lines that used track in the New River area of southwestern Virginia. A New River Train was part of the Norfolk and Western system serving the town of Fries from 1883 to 1985. The melody has been described as a "Blue Ridge Mountain standard" and has been recorded numerous times since the first recorded version by guitarist Henry Whitter in 1924, although Fields Ward (1911–1987) remarked that he believed his southwest Virginia musical family learned it from regional sources around the year 1895. Subsequent recordings were by Kelly Harrell in New York in 1925 (backed by a 'string band' made up of the city's studio musicians—hear the recording below), Sid Harkreader a bit later in 1925 (playing guitar to accompany his vocal, rather than playing his fiddle), and several different recordings by Vernon Dalhart. Blech goes on to identify Ernest Stoneman's recording with the Sweet Brothers on July 9th, 1928 (who was inspired by Whitter to record) and two more versions by Harrell, in 1925 and 1926. A recorded oddity was the 1927 version of the song in the key of 'G' by the South Georgia Highballers (released as "Green River Train"), who used a musical saw as accompaniment. Nearly all early versions were set in the key of 'D', although it is occasionally heard in 'G'. 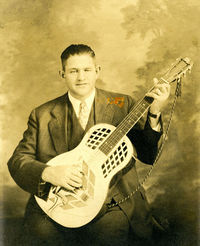 Another version of the song is called "Honey Babe", and differs only in the chorus.

Back to New River Train[edit]