Back to Noisy Curlew (The)[edit]

NOISY CURLEW, THE. AKA and see "Jack Maguire's Reel," "Jack McGuire's Reel," "Roger Sherlock's." The curlew is a large brown-streaked wading bird that emits haunting cries and a bubbling trill song (related to courtship, but heard in all seasons). It winters on the coast of Ireland, mainly on the coast and in estuaries, although sometimes inland, but during nesting season may be found in numerous habitats, including upland moors, grassy or boggy open areas in forests and damp grasslands and traditionally managed hay fields particularly in river valleys. 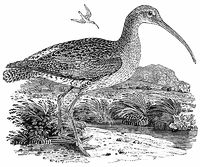 Back to Noisy Curlew (The)[edit]