NONESUCH [1]. AKA - "None Such." AKA and see "A la Mode de France." English, Country Dance Tune (2/2 time). D Dorian/Minor (most versions): E Minor (Chappell). Standard tuning (fiddle). AA (Brody): AB (Fleming-Williams, Sharp): ABB (Barnes, Karpeles & Raven): AA'BB' (Chappell). King Henry VIII built an opulent hunting lodge in Duddington, near Epson, Surrey, in 1538 and called it Nonesuch. It was the most extravagant of Henry's 14 houses, and played a key role in the development of Tudor architecture and the introduction of Renaissance style in England, and was built from scratch to adorn Henry's new hunting estate close to London. Nonesuch took almost ten years to complete, and was not quite done when Henry died in 1547. His successor, Queen Mary I disliked hunting, however, and allowed it to go to Henry Fitzalan, 12th Earl of Arundel, in a purchase-and-exchange deal in which she got some of Arundel's Norfolk estates. Young Queen Elizabeth I enjoyed visiting Nonesuch as a guest of Lord Lumley, son-in-law of the Earl of Arundel, and it was recorded that "there is much dancing of country dances in the privy chamber at Nonesuch, before the Queen's majesty, who is exceeding pleased therewith." Elizabeth enjoyed Nonesuch so much that she purchased the estate in the last decade of her reign, returning it to the crown. It remained in royal use until the Civil War, but after the execution of Charles I it was confiscated by Parliament and sold in 1649. Nonesuch again returned to the crown with the Restoration, and Charles II gave it to his mistress, Barbara Castlemaine, who finally had it demolished in 1682 due to the needs of her extravagant lifestyle and the cost of maintaining the property. She sold the lands piecemeal to pay her gambling debts. The site was excavated in 1959. 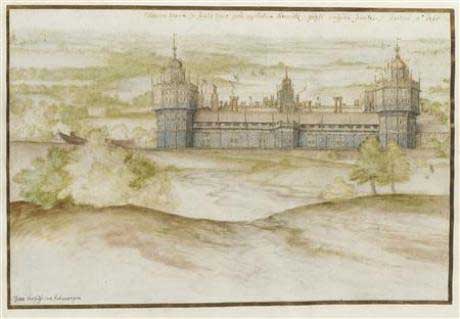 "None Such" was published by John Playford in the first volume of his English Dancing Master (1651). Under the alternate title it appears in Musick's Delight on the Cithren and Musick's Recreation on the Lyra-Viol, sometimes in a major key. The dance instructions for "None Such" are for a four-couple set dance, whose sets (and tune) are substantially the same as "A la Mode de France," which is a "Longways for as many as will" dance. The title refers to an item or thing without parallel as in 'there is none such that can compare'. In this context the word was used by the blind Irish harper Arthur O'Neill (1734-1818) in his memoirs. O'Neill relates agreeing to oversee the making of a harp by one Conor O'Kelly, a master harp-maker although "a peevish man." O'Neill facilitates the harps manufacture, but on completion "...[it] had to be taken asunder, as when it was tuned the treble was thought to be too long...The harp was a second time put together. It turned out the best one I ever heard or played upon. It then only wanted varnishing to make it a nonesuch (ed. italics mine)...." (Arthur O'Neill, Memoirs, Chapter V, 1810).